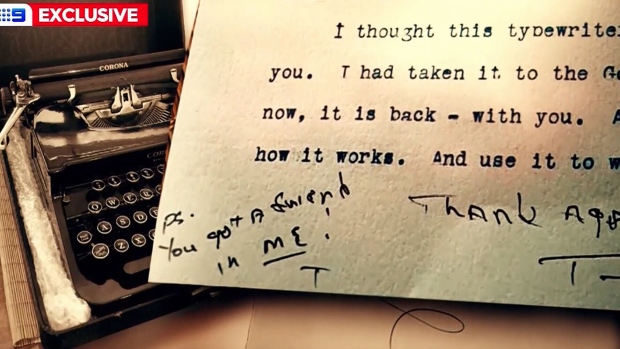 TORONTO — An Australian boy named Corona has had an unsurprisingly difficult time lately.

Eight-year-old Corona DeVries told a local news station that he’s been bullied because of his given name.

“Coronavirus. They just kept on saying that and I get really mad,” he told Sydney’s 9 News.

But after the boy instead channelled his anger into writing letters, he developed a famous pen pal—coronavirus survivor Tom Hanks.

“Dear Mr. and Mrs. Hanks, my name is Corona,” the boy wrote in his initial letter. “I heard on the news you and your wife have caught the coronavirus. Are you OK?”

After Corona mailed Hanks the letter, he received more than just a letter in return. The Oscar winner sent Corona a Corona-brand typewriter. It appears to be the same one that Hanks shared a picture of in March after testing positive for COVID-19.

Hanks was among the first public figures to announce they had contracted COVID-19. He and wife Rita Wilson were in Australia, where they quarantined until their symptoms abated.

Corona, who has grown up listening to Hanks voice the character Woody in Pixar’s Toy Story series, now feels a bit famous himself, he said.

The letter from Hanks was signed with a handwritten postscript: “You’ve got a friend in me.”