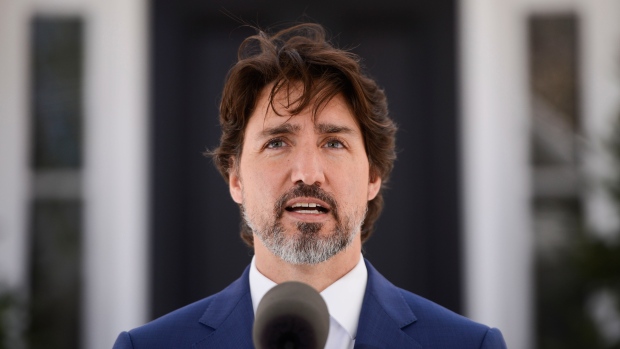 OTTAWA — Prime Minister Justin Trudeau says that an agreement has been reached with all provinces and territories to top up the wages of some essential front-line workers including those in long-term care facilities where COVID-19 has spread among both residents and staff, with deadly impact.

The boost to wages will be done though a cost-sharing initiative between the federal government and the provinces and territories. The federal government is budgeting up to $3 billion to be doled out across the country to workers who are making “very low wages, while doing extraordinarily important work.”

Trudeau said the federal government will be putting up three quarters of the top-up with the provinces and territories covering the other 25 per cent of the funds, totalling $4 billion.

It will be up to each province and territory to determine exactly who will be eligible in each region, but the bottom line is: “If you are risking your health to keep this country moving and you’re making minimum wage, you deserve a raise.”

The reason there is not one uniform hourly rate increase, Trudeau said, is because the spread of the pandemic is in different stages across the country, and the way essential services including healthcare are delivered differs from one province to the next.

On April 15, Trudeau first promised that funding was coming to keep front-line workers on the job and that wages would be boosted for essential workers who are making less than $2,500 a month through a transfer to the provinces and territories.

“Premiers from across the country all agree that we need to support our essential workers,” Trudeau said on Thursday. “We’re relying on these workers now, more than ever, and we will be there to support them.”

Already, Quebec, British Columbia, Ontario and Saskatchewan have rolled out hourly pay increases for some workers in essential service sectors.

Trudeau has another call with the premiers on Thursday evening where this wage increase and other ongoing pandemic issues are set to be on the agenda.

“I know a number of provinces had already put out lists of workers that they consider to be essential and many of them are joining from those lists, in terms of who gets the top up… We trust the provinces to make sure that people who need it get this help,” he said.

This comes as Chief Public Health Officer Dr. Theresa Tam said on Wednesday that, while the epidemic is “decelerating” in Canada, “the number of deaths will continue to increase” particularly among the cases connected to long-term care homes.

The aim of the wage boost is to keep as many of these workers on the job, especially those in seniors’ homes, given they’ve now been asked to only work at one facility to help lessen the spread, resulting in many earning less than they would if they stopped working and collected the Canada Emergency Response Benefit.

Seniors’ homes across the country have seen staff become infected and others reluctant to show up for work citing concerns of inadequate personal protective equipment, leading to the military being called in to help.

He said, by mid-May there will be 25 facilities in the Montreal area with military assistance on-hand. There are currently 13 long-term care homes where hundreds members of the military have been working, but the total deployment is set to increase to 1,350 personnel.

In Ontario, 265 members of the military have been deployed to five long-term care homes, and Sajjan said the military is ready to assist in more if needed there or elsewhere in the country.

“We know many Canadians are worried about their loved ones in these facilities. They’re concerned for the health and the added stress of the isolation that our parents and grandparents are experiencing,” Sajjan said.

Trudeau said the work they are doing to support the staff in these homes should be seen as a comfort to families whose loved ones they have been unable to visit for weeks.