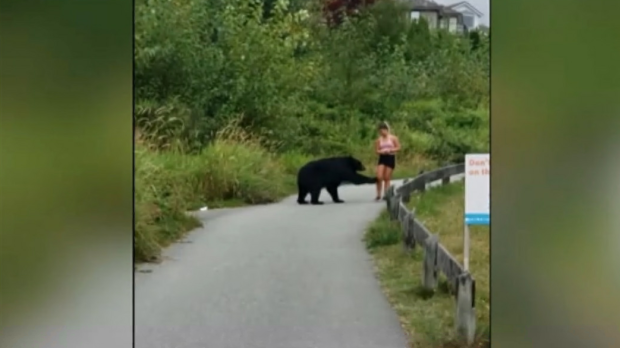 VANCOUVER — A Vancouver woman who’s at the center of a bear-swatting video is sharing her in experience in the hopes other hikers can learn from it.

Kendra Chin said she’s been doing the Coquitlam Crunch once a week since spring and has never seen a bear, adding that’s why the unexpected encounter caught her off guard.

She was on her way down from the summit and was running on the pavement when she spotted the black bear at the edge of the trail.

“I made a slight movement and then it started coming towards me. It kind of freaked me out, so I just stood there – I didn’t know what to do,” Chin told CTV news.

In response to speculation on social media, Chin said she never attempted to take a photo of the animal.

“I definitely wouldn’t risk my life trying to take a selfie with a bear so that wasn’t the motive. I was just running down the Coquitlam Crunch, as I usually do, and it just so happens that a bear was there,” she said.

Video that’s gone viral on social media shows the black bear slowly stepping towards Chin and then tapping her leg. The animal retreats for a few seconds before approaching her again. As soon as she is able, she runs away and the bear slowly goes back into the bush.

Chin said the bear’s swipe felt like being scratched by a dog.

She said she’s since learned various tips on how to handle bear encounters and considers herself lucky.

“I don’t think that bear specifically was aggressive towards me. It was just kind of curious,” she said. “The bear didn’t fully attack me so maybe the bear’s life should be saved, I guess. It did no harm to me. It could have been worse.”

But conservation officers saw the video and described the encounter as alarming, adding the bear seems to have lost its fears of humans.

Officers closed the upper section of the trail and set up a trap.

The man who took the video is urging conservation officers not to destroy the animal if it ends up being trapped.

“I think the decision has been made that they’re going to put down the bear. And that’s not fair,” Sam Abdullah told reporters Monday. “I’m asking B.C. conservation officers to do the right thing.”

Abdullah believes the bear seen in the video may be getting mistaken for another bear that’s been reported to be getting into garbage in the area. He says he had posted the video in hopes of the city increasing signage about bears on the crunch.

Smith said there have been 20 black bear calls within three-kilometre radius of the incident, adding this latest incident is out of the norm.

He said if a bear does get caught in the trap that was set up over the weekend, it will be checked carefully to make sure it’s the same adult bear from the video.

“No matter where we put it, in British Columbia, there’s going to be other hikers campers, recreators, industrial facilities where there’s people, and where there’s people, this bear has made a connection that you know there’s not a fear of humans, and potentially the look of humans as a that they have food sources,” Smith said.

Conservation officers returned to check the trap Monday but the bear wasn’t inside.

Smith suggests people carry bear spray, raise their arms to appear bigger, speak in a calm manner while backing away slowly if confronted.

Hikers on the Coquitlam Crunch said they are used to seeing bears in the area, but they usually manage to co-exist safely.

“We know that there are bears in the area from time to time, so we just need to remember just from seeing that video that they are in this area and we need to be aware of that,” said Coquitlam resident Eduardo Herrera who hikes the crunch almost every day. “Just to be extra careful.”

“This is the time for them to be around, we’re in their area,” Herrera added, noting he saw a bear near some berry bushes along the trail just a few weeks ago.

The upper portion of the Coquitlam Crunch remains closed at Panorama Drive.