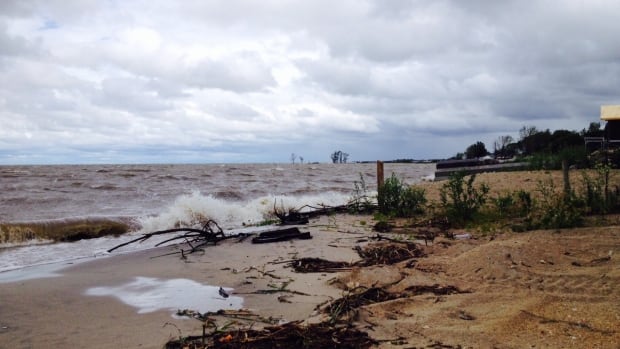 Renata Bandel said she didn’t think twice about jumping into the cold waters of Lake Manitoba to save a group of strangers this week.

Bandel was at Delta Beach near Portage la Prairie with her sister on Wednesday afternoon when a couple rushed to shore, looking for help for a woman who was trying to swim back after her inflatable raft blew out onto the lake, the 52-year-old told CBC’s Up to Speed host Nadia Kidwai on Friday.

Bandel said she had no idea how serious the situation was, but she thought if she could make it out to the woman, she could get her back to safety — so she started swimming.

“Once I kind of got her in my focus, I swam towards her and then I could hear her screams and she was really panicked and scared,” Bandel said. “She was just relieved and started sobbing and crying and I told her that it’s gonna be OK.”

Bandel said she told the woman to float on her back so she could swim her back to shore. But the rescue wasn’t over yet. The woman told Bandel she was on the raft with two friends — one who also tried to swim away, and another who was still floating somewhere on the lake.

Bandel said once they got to shallower water, her sister came out to help bring the woman to shore, where police, paramedics and a crowd of people scanning the water for the woman’s friends were waiting. The woman still on the raft had called 911, RCMP said.

Bandel said her sister commented on how cold the water was — but she hadn’t noticed. She just headed back into the water to find the other women.

“I just couldn’t stand around just waiting,” she said.

From shore, Bandel’s sister spotted another woman bobbing up and down in the water and shouted directions.

“Once I saw her, I just kind of locked into her and just swam to her,” Bandel said.

The waves were getting bigger, splashing water up their noses, but Bandel made it out to the second woman and stayed with her until a police boat showed up shortly after. They jetted off to find the third woman, whose raft had been spotted a little further north, Bandel said.

When the boat finally got the women to shore for medical attention, Bandel said, she imagined how she would have felt if it were her two sons whose raft had floated out too far.

“If my kids were in need of help, I would hope somebody would help,” she said. “I couldn’t just go back to shore knowing that somebody was calling for help and I was right there.”

And as she tried to go to sleep after, she tossed and turned, thinking about what might have happened if she hadn’t gone to the beach that afternoon.

“I was just so glad I was in the right place at the right time,” she said.

Mounties said the second woman who was rescued from the water was taken to hospital with non-life threatening injuries.

Delta Beach is about 90 kilometres northwest of Winnipeg, on the southernmost tip of Lake Manitoba.