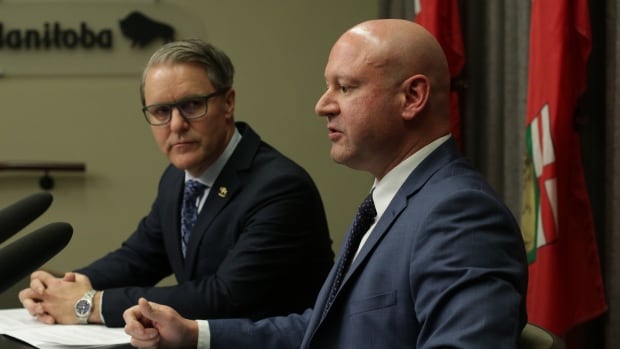 A woman in her 90s with COVID-19 has died, the second death linked to an outbreak of the illness at the Bethesda Place care home in Steinbach, Man.

It is the 14th death connected to COVID-19 in Manitoba.

There are 22 new cases of COVID-19 in Manitoba on Thursday, and one case reported on Aug. 15 was removed from the province’s total cases, Chief Provincial Public Health Officer Dr. Brent Roussin said at a news conference.

Manitoba’s five-day test positivity rate is now three per cent, down slightly from the record 3.1 per cent on Wednesday, Roussin said.

Manitoba’s top health officials are scheduled to give an update on COVID-19 in the province on Thursday afternoon.

Officials announced Thursday morning that a health-care worker at the Rideau Park Personal Care Home in Brandon, Man., has tested positive for COVID-19.

So far, no other cases have been detected at the care home, but an outbreak has been declared “out of an abundance of caution,” said Blaine Kraushaar, a spokesperson for the Prairie Mountain Health region, where the home is located.

It’s the second care home in Manitoba to have a COVID-19 outbreak declared in less than two weeks.

As of Wednesday, eight people linked to the Bethesda Place care home in Steinbach, Man., where an outbreak was declared on Aug. 17, had contracted the illness.

That tally included four staff, one of whom is a nurse. It also included three residents, two of whom were in hospital on Wednesday, and one woman whose death was announced on Tuesday. Her death was Manitoba’s 13th fatality linked to COVID-19.

On Wednesday, Manitoba recorded a test positivity rate of 3.1 per cent, the highest proportion of tests that have come back positive in a five-day span since the beginning of the pandemic.

The province said the reason the test positivity rate jumped so high is because of positive results linked to targeted testing in known clusters in Manitoba.

As of Monday, more than one-third of the province’s active cases were linked to communal living settings, including Hutterite colonies and care homes.

The province announced 25 new cases of the illness caused by the new coronavirus on Wednesday, including the eighth case at Bethesda Place. The update brought Manitoba’s active caseload to 408, the first time the province has reported more than 400 active cases.

As of Tuesday, Manitoba led the country with the most active COVID-19 cases per 100,000 people, data from Health Canada says.