Home  »  News   »   With most of Winnipeg shut down by COVID-19, criminals stand out more, police chief says 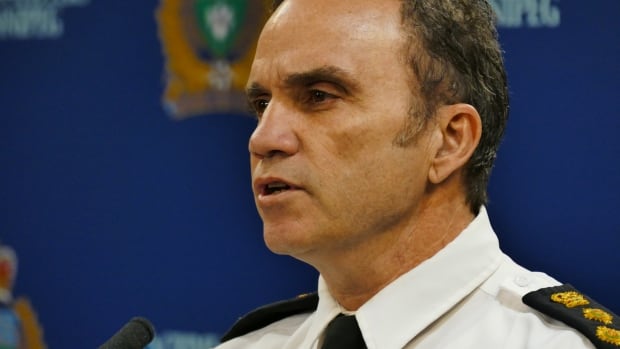 With less traffic and fewer people out and about due to the COVID-19 pandemic, Winnipeg’s police chief says officers are able to catch criminals more easily.

But Chief Danny Smyth said it’s been quieter on the streets of Winnipeg, though some areas of the city have seen a spike in car break-ins.

When crimes have happened, it’s been easier for officers to apprehend people, because they stand out, Smyth said.

“It certainly feels different out there, particularly at night, because there’s, you know, fewer people out and about, there’s less traffic. So the community certainly has a different feel to it,” he told CBC Information Radio host Marcy Markusa.

Smyth announced last week that a civilian member of the Winnipeg Police Service who works in the 911 call centre had tested positive for COVID-19. Another four employees who worked in close proximity to the woman were sent home and told to self-isolate, he said.

The police service was down about 130 officers, or 10 per cent of its staff, in March because of people self-isolating after returning from travel, Smyth said.

When police are sent out, dispatchers ask people to come outside for non-emergency calls so officers can interact with them outdoors and physically distance themselves, Smyth said.

Police officers have been equipped with personal protective equipment such as gloves and N95 masks, Smyth said last week.

If they are required to arrest somebody in an emergency situation, they have some protocols in place after the arrest to try to determine whether the person arrested is at risk of having COVID-19, Smyth said.