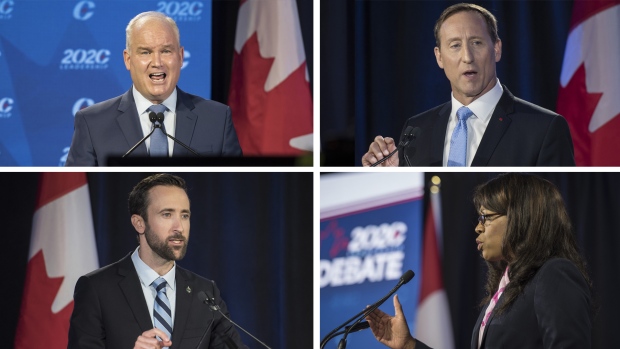 OTTAWA — All ballots have now been cast in the federal Conservative Party’s leadership race, and by the end of the weekend Canadians will know who will be taking the helm of the party positioning itself to be a government-in-waiting.

The incoming head of the Official Opposition will be taking over the party at a key moment, as the country faces a possible second wave of COVID-19 and the Liberal minority has suspended Parliament to regroup amid talk of a snap election.

With the victor to be named at an event in Ottawa on Sunday, candidates Leslyn Lewis, Peter MacKay, Erin O’Toole and Derek Sloan now have Saturday to catch their breath and prepare for what could be the biggest day of their political careers.

Their moment will look much different than it has for Conservative leaders in the past, due to the ongoing COVID-19 pandemic. Instead of crowds of supporters packed in, each candidate will be watching the results come in from separate rooms. The results will be read out in a different building entirely from where the tabulation is happening, with strict public health protocols to ensure the counting goes smoothly, according to Conservative Leadership Election Organizing Committee (LEOC) co-chair Lisa Raitt.

“We’re going to try to make it engaging for everybody sitting at home,” she said. “It’s a bit of a celebration too, it’s been a long haul. It has been very difficult and the candidates I’m sure are happy that it’s over, but Conservatives are ready for a new leader, they’re ready for direction.”

Despite many viewing the race early on as a tight fight between frontrunners MacKay and O’Toole, the unprecedented nature of 2020 has left the door open to surprise results, depending on how the support for a surging Lewis and social-conservative-backed Sloan shakes out.

The entire race started with optimism that a fulsome discussion about the party’s future, its identity and the direction it would be headed in would be fleshed out in the process.

Outgoing Leader Andrew Scheer’s performance in the 2019 election was highly criticized, with the consensus being that while he managed to win more seats, his social conservative ties hindered him from picking up more, particularly in the vote-rich GTA.

With MacKay framing himself as the progressive choice, and O’Toole signaling his openness to Lewis and Sloan’s more conservative backers, it’s possible the party could be in for a similar outcome as what happened in 2017, when Scheer’s victory was clinched with an assist from the down-ballot social conservative supporters on other candidates’ tickets.

As of Friday afternoon, with just hours to go before the 5 p.m. cutoff for the mail-in ballots to be received at party headquarters, the Conservatives said more than 165,000 ballots had been cast, in a race that had nearly 269,500 eligible voters.

That’s a historic turnout for the party, but as University of Toronto political science professor Nelson Wiseman said, it’s still a “very small percentage of the Canadian population that will be selecting the person who has an excellent chance of becoming the prime minister.”

In a race where each riding holds the same weight, the winner might come down to who had the best cross-country appeal, given all four candidates currently call Ontario home.

The voting has been done by ranked ballot, allowing party members to indicate on their ballots their first through fourth choices to be their party’s next leader.

While not all voting members will fill in the ballot past their first choice, those down-ballot votes become key should none of the four candidates secure the required 50 per cent of the vote on the first ballot.

Should the voting need to go to a second, or even third ballot to determine a winner, in each required round the candidate with the fewest votes will have their voters’ next choices allocated to the remaining hopefuls. This process of support reallocation will continue until a candidate receives the majority of votes.

The leadership race got underway on Jan. 13, prompted by Scheer announcing in December that he was stepping down as leader but would be staying on until a replacement was named.

By mid-March the campaign was put on pause due to the pandemic, re-starting a month later with an extended timeline and a new virtual focus, including for the two official debates that were live-streamed to supporters.

Though as more aspects of society reopened and adjusted to the “new normal,” so too did the candidates, holding more in-person events and outdoor rallies across the country, collecting ballots as they went.

Once named, the new leader will have to get to work on mending the rifts typically exposed in any leadership fight that sees members of caucus rooting for and actively campaigning against each others’ picks.

“The party’s been waiting a long time I think, to put a fresh face on itself, and to be able to recast its message… they want somebody who’s really able to take the reins of the party and harness the energy of the party, figure out how they’re going to bring together all of the different parts of the party that needs to be brought together,” said Dalhousie University political science professor Lori Turnbull. “This is a pivotal moment in history for them.”

With a Conservative caucus of 121 facing what’s shaping up to be a series of key votes when the House of Commons reconvenes in late September, ensuring all MPs are on side to vote in-line will be essential.

The main decision is being set up to be whether to prop-up the embattled Liberals to support seeing COVID-19 financial aid benefits flowing to the Canadians that still need them, or to move to defeat the minority government in a vote of non-confidence, potentially sparking a snap election shortly into the new leaders’ tenure.

FAST FACTS ABOUT THE FOUR

Over the last week, CTV News has profiled the four candidates hoping to be the next prime minister of Canada. Here are four things you need to know about each.

“Well I’ve been very up front with exactly what I’ve done, and exactly what my policies are… and that’s what I intend to stick to. So there’s no hidden agenda here,” Lewis said in a March 10 interview on CTV’s Power Play. CTV News requested an interview this week but Lewis was not available.

“Having lived through those divisive times in the past, I’ve been sensitive to that reality and so our message to them is everybody is in, the big blue tent is open. We need to expand the door and push out the tent pegs so that more people feel their voices heard,” MacKay said in an interview that aired on CTV National News on Aug. 18.

“I’m in the House of Commons ready to go on day one… to confront the government. I’ve got cabinet experience, military experience, and private sector experience. So I’m ready to go. I’m ready to be the prime minister. I’m the only one in this race like that. I would also be the first leader we’ve chosen from Ontario since 1948,” O’Toole said in an interview on Your Morning on Aug. 18.

“I think that anything worth saying at this stage can be controversial to some… There’s a lot of people who are concerned about many of the things that I’m bringing to the table, and I believe truly that this is the beginning of a movement that has a broad support across many sectors of society,” Sloan said in an interview with CTV National News on Aug. 20.

With files from CTV News’ Glen McGregor and Kevin Gallagher