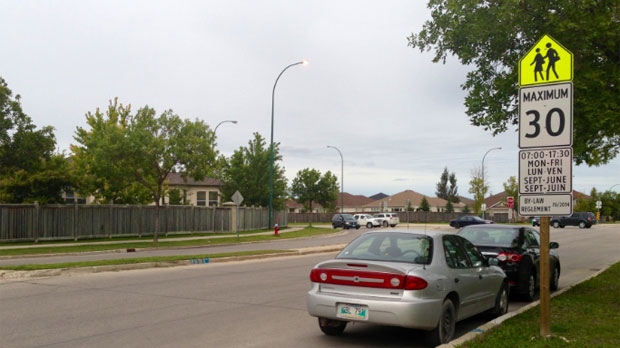 WINNIPEG — With kids heading back to school in just one week, reduced speed limits in school zones are back in effect in Winnipeg as of Tuesday, Sept. 1.

This means speed limits are 30 km/h in designated school zones from Monday to Friday between 7 a.m. and 5:30 p.m. These speed limits remain in effect from the beginning of September until the end of June.

Any drivers caught speeding in a school zone could be fined at least $200 and could move down two levels on the driver safety rating scale.

Reduced speed limits in school zones apply to any street that borders a school with Grade 6 students or younger; is not a regional street; and meets the requirements for signage as outlined in the Manitoba Reduced-Speed School Zones Regulation.

Winnipeg drivers should be aware of the signage that indicates a reduced-speed school zone.

According to Manitoba Public Insurance (MPI), it is also illegal for a driver to pass another moving vehicle in a school area within 15 minutes of the start or end of classes, or any time kids are on the school grounds or near the road.

For drivers outside of Winnipeg, if the signs don’t specify a time when the speed limit is in effect, then the reduced maximum speed is in effect at all times.