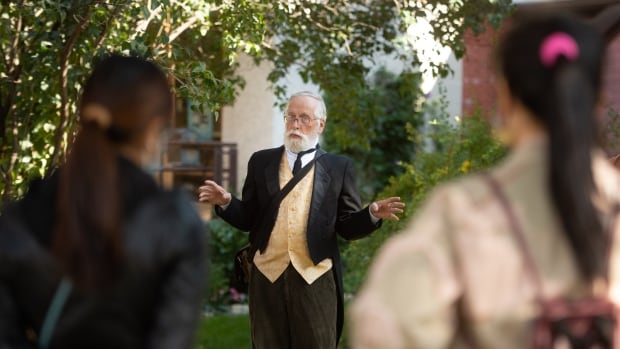 On a balmy Saturday afternoon, Ron Robinson struts onto the lawn outside Dalnavert Museum. He is dressed for the day in his Victorian best, a black tailcoat and yellow brocade vest. With a nod of his head, he gestures to the sidewalk that borders the historic Carlton Street mansion.

“There used to be hitching posts out front here,” Robinson says to the group of seven people spread out around him, all of whom are wearing masks.

That’s not the only fun fact. Near the turn of the 20th century, the city had one drinking establishment for every 200 people. For that reason, “Winnipeg was known as one of the wickedest cities in the Dominion of Canada,” he adds. “So keep that image in your mind.”

Then Robinson is off, leading the tour group down the street to look at other points of historic interest. The veteran radio host is in character as Dalnavert’s original owner, Sir Hugh John Macdonald, son of Canada’s first prime minister; and this outdoor tour is part of a unique Doors Open Winnipeg weekend.