Home  »  News   »   Winnipegger reacts to Snowbirds crash, days after talking to the pilot 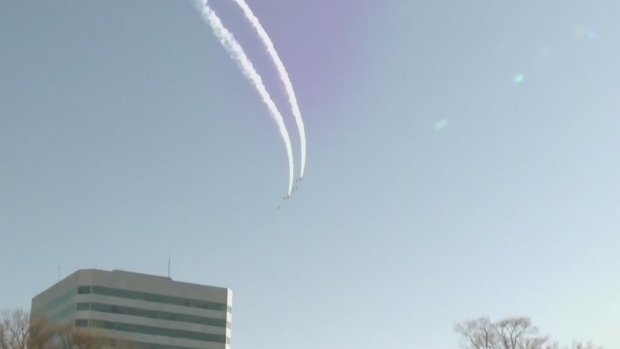 WINNIPEG — A Winnipeg woman is speaking about her friend who piloted the Snowbirds jet that crashed near Kamloops B.C. on Sunday, killing one and injuring another.

Wendy Trudel works as a civilian at 17 Wing, the main lodger unit at CFB Winnipeg, and was on-site when the CF Snowbirds came through the city last Tuesday.

The Snowbirds were flying across Canada for “Operation Inspiration,” a tour intended to raise Canadians’ spirits and salute front line workers during the COVID-19 pandemic.

“I got a few pictures of him with the group, and we just had a quick chat,” said Trudel.

Later that day, the CF Snowbirds flew through Winnipeg and continued west on their tour.

MacDougall, a team coordinator for the Snowbirds, was the pilot of the aircraft and sustained non-life threatening injuries.

Trudel said she heard about the crash on social media, but didn’t have any details.

“I had sent Richard a text [Sunday] in messenger, not realizing at the time that it was him that had crashed,” she said.

The Royal Canadian Air Force Flight Safety Team is currently investigating the circumstances of the accident.

Trudel is wishing her friend a speedy recovery.

“Love and support for you and the family, and all the families of the Snowbirds team,” said Trudel.