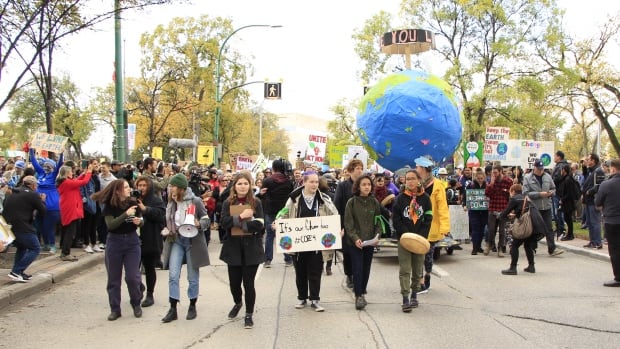 Local activists are holding another climate strike — using the radio.

A demonstration organized by Manitoba Youth for Climate Action last fall brought out thousands of Manitoba students who marched with signs through downtown Winnipeg, joining millions of people doing the same thing around the globe.

With physical gatherings now banned because of the COVID-19 pandemic, they’re asking people to turn their radio to the city’s two campus radio stations and make some noise to draw attention to climate change on Friday morning.

Organizers also are asking people to participate in their demonstration by using noisemakers, pots and pans, instruments and songs to make some noise for climate action.

Anil Pinto-Gfroerer, one of the organizers with Manitoba Youth for Climate Action, said they wanted to do something that would allow the same number of people to participate and feel connected to one another.

“I just hope that people can see that we all still care and that we are all thinking of each other and thinking of our planet together,” she said.

While she’s glad the COVID-19 pandemic is getting the attention and response it deserves, she believes society should be giving climate change the same amount of attention.

The global response to COVID-19 also shows that people can respond quickly to issues like climate change, she said.

“I believe that through our common experience of this current crisis, we are united in empathy, and in this rediscovered unity … we have the power to pressure governments and corporations to not act in their economic interests but in the interests of the people on the planet,” she said.

“This power founded in human empathy gives me great hope.”

Thomas Steur, another organizer, also said he hopes the pandemic shows people something can be done about climate change.

“I think we can realize that we can absolutely fight climate change together if we just band together and do the same kind of things that we’re doing in this pandemic.”