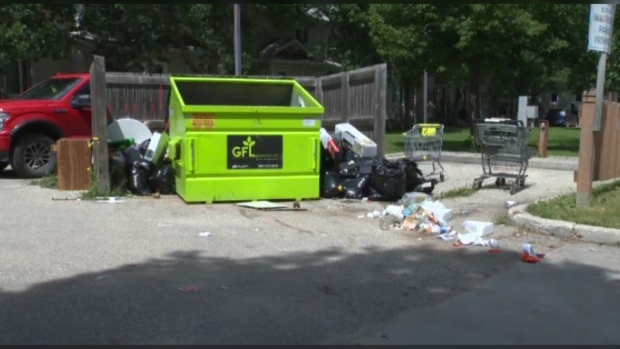 WINNIPEG — A Winnipeg woman has been left frustrated with the amount of garbage piling up on her Sturgeon Creek street.

Marnie Baldwin said the dumpster on Greenway Crescent isn’t big enough to hold the amount of garbage that goes into it, forcing trash to be left out on the street.

Baldwin said she has reached out to the city for possible solutions including: a bigger bin, an additional bin or more garbage pickups. She said she was told none of these options are a possibility.

Baldwin added that even when the garbage is collected, it doesn’t resolve the issue, as the overflow of garbage gets left behind.

“The garbage men don’t collect what’s on the ground, they only pick up the bin, but the bin this morning, before the garbage pickup came, it was about four-feet above the height of the bin, it was so full,” she said.

CTV News has reached out to the City of Winnipeg for comment.

– With files from CTV’s Renee Rodgers.