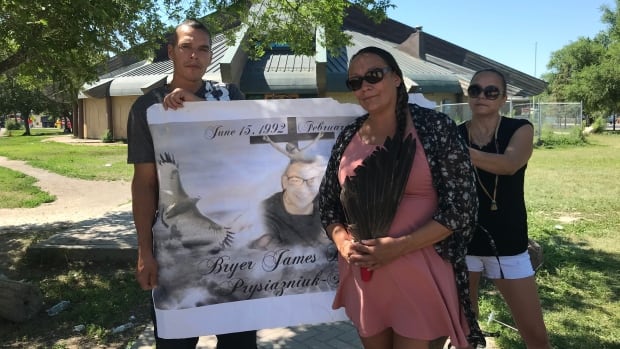 Hundreds of people are walking together in Winnipeg to honour and remember missing and murdered Indigenous men and boys.

The group walked from Thunderbird House to the Oodena Circle as part of the third annual gathering on Saturday afternoon. For organizer Gina Settee, whose son was killed in 2017, it’s a deeply personal cause.

“My son just happened to be in the wrong place at the wrong time, and that happened,” she said.

“Today the message would be to honour our men.”

Bryer Prysiazniuk-Settee was shot shot twice in the chest at a North End home and turned up dead in the snow blocks away. A jury trial found Christopher Brass guilty of second degree murder.

There have been 24 homicides so far in Winnipeg this year.

“The men go under the radar and the numbers are just as high as the women. Our men are very important. They balance us out,” said Settee. “They’re our warriors. They need to be standing beside us and walking with us whether they’re here or not.”

She added the event is to call for the need for education to help the next generation develop stronger purpose, leadership skills and to help put an end to violence. Mitch Bourbonniere, who volunteers with several men’s support groups, including Ogijita Pimastiswin Kinamatwin (OPK), is co-organizer of the event.

Settee said it’s critical that families come together, walk beside each other and support one another. They are also walking for men who are incarcerated or lost with homelessness, addictions or in life, she said.

“And during this time of COVID there’s been so many murders, so much violence. And it needs to stop. We have to support one another, we have to find ways to build our community with strength.”

She said about 300 people came to the event last year, but she expected a bigger turnout this year. The event, which is usually held on Father’s Day, had to be postponed this year due to COVID-19.

She hopes events like hers inspire more youth and young men to become involved in groups that work to improve their communities.

“Come together as a community. We have to focus on our youth to teach them … to keep them strong. To keep them going in the community with positive things in life.”