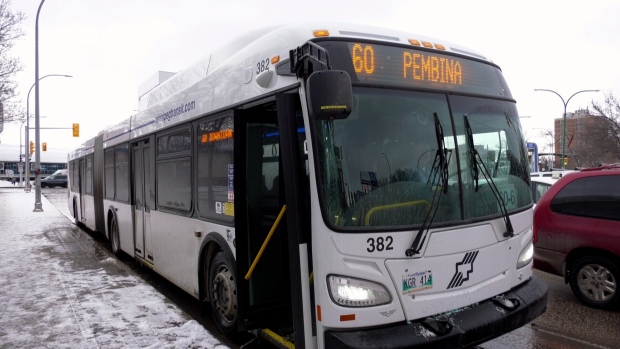 WINNIPEG — The city’s transit department is working to promote physical distancing on its buses to help prevent the spread of COVID-19.

The city announced that starting on Wednesday, new messaging messaging will be on all Winnipeg transit buses reminding riders to practice physical distancing.

The initiatives include electronic signs and stickers on bus shields.

Jason Shaw, manager of the city’s Emergency Operations Centre said the city will not be implementing rear loading initiatives at this time.

“All drivers are protected by their safety shield, and are not in direct contact with the public,” he said.

The Amalgamated Transit Union Local 1505 sent a letter on Tuesday, advocating for rear entry on the buses and suspending fares. Several cities across Canada including Toronto, Montreal, Vancouver and Brandon have implemented similar policies to protect bus drivers and passengers.

“We’re tired of watching other cities act while Winnipeg Transit is still considering their options,” James Van Gerwen, ATU president, said in a written statement. “The best time for Transit to act on this was last week. The second best time is right now.”

Shaw said the city and the union are both in constant communication about plans for drivers, and said the health and safety of staff and citizens remains important.

“We are continually assessing, and I would never say never to ruling any strategy or tactic off the table,” he said.

Shaw said they’re only using buses that have shields installed on city streets.