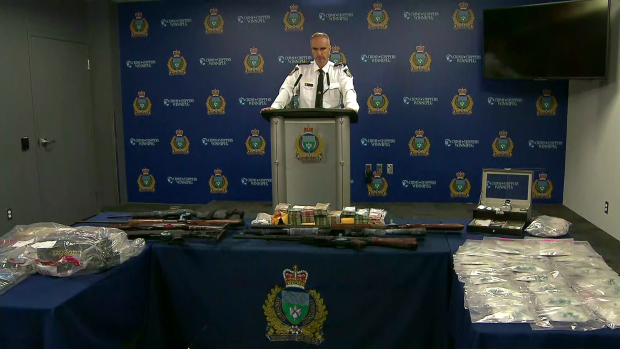 WINNIPEG — Winnipeg police have charged three people and seized a variety of drugs, guns, money, and even a “how-to” book following an investigation that started in the spring.

Insp. Max Waddell said this was the first instance where he has ever seen a “how-to” book on the inner working of a drug operation seized in a drug bust and that it was quite surprising.

“Basically it was A-Z. When I refer to that, from the beginning of how you obtain the product that you need, to how you would traffic, to how you would collect your money, and how the operation ran was detailed in there,” said Waddell, who noted despite the find, the information wasn’t new to police.

The drug enforcement unit, with the assistance of the tactical support team, the guns and gangs unit, and the central division community support unit help with the investigation and were able to arrest several suspects.

On June 22, police executed a search warrant in the 1400 block of St. Mary Avenue and the 800 block of Waverly Street and they seized several items, including:

• A 21-page how-to instruction manual on the inner workings of the operation;

• Two canisters of bear spray; and

Waddell said there is an “overabundance” of Fentanyl in Winnipeg, and this didn’t make a significant impact in the opioid drug trade, but police did seize enough Fentanyl for 7,500 people.

“It’s safe to say that if I could save 7,500 lives, I would say we were successful in this operation.”

Police have charged three people in connection with the seizures.

Keaton Brayden Ellis,26, Branden Anthony Ellis, 27, and Jonathan Michael Pace, 29, have been charged with possessing a scheduled substance for the purpose of trafficking – Fentanyl, and possessing proceeds of property obtained by crime over $5,000.

Police said all three were released on an appearance notice.

The charges against all three men have not been tested in court.

Waddell said police delayed the release of the information because they are investigating other people.

“That part of the investigation has not come to fruition yet,” he said.

Winnipeg police are reminding people that any drug contaminated by Fentanyl can be potentially fatal.

Police also noted that if anyone is suffering from addiction issues, they can reach out to medical professionals for assistance.