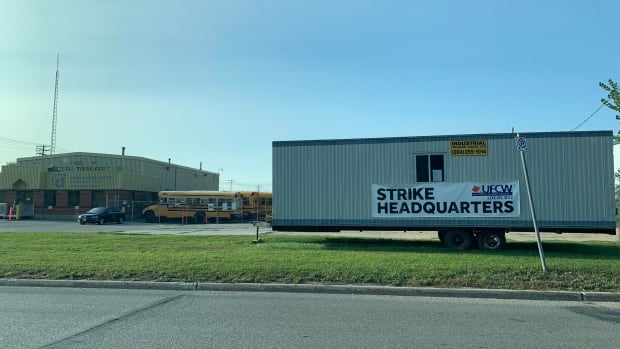 Winnipeg’s largest school division warned parents they could face delays dropping their children off for the first day of classes after bus drivers went on strike.

In a letter sent to parents, the school division said union members were expected to start walking the picket line around the bus depot on Tuesday. The strike is expected to affect transportation for 2,300 students.

“We expect that more students will be driven to school as a result of the strike, and this may cause congestion in the area of your child’s school,” the letter says.

The division asks parents to park a couple of blocks away from the school and walk the rest of the way.

Students who need wheelchair service will still be transported to school, the division said.

The United Food and Commercial Workers Union Local 832 and the Winnipeg School Division hit an impasse in collective bargaining negotiations two weeks ago.

“Our drivers would much rather be driving our children to and from school than walking the picket line, and we’re very frustrated that we’ve had to get to this particular point,” said Bea Bruske, secretary treasurer for the union, in an interview on CBC Manitoba’s Information Radio.

Drivers for the Winnipeg School Division haven’t had a collective agreement since June 2019, and had originally planned to go on strike in April, but then the COVID-19 pandemic hit.

“This isn’t something that we’ve waited for this particular timing,” Bruske said.

“We would have been on a picket line right after spring break, if this COVID situation hadn’t occurred. So there’s never a good time to take a strike.… We recognize that.”

The union says the school division is using provincial wage freeze legislation, known as Bill 28, to force drivers to accept two years without a pay increase, followed by raises of 0.75 per cent and one per cent in the third and fourth years of the new contract.

Manitoba’s Court of Queen’s Bench ruled the wage freeze law unconstitutional, but the province has said it will appeal the decision.

The division says its offer to drivers is fair, but the union rejects that.

Drivers have a host of new responsibilities due to COVID-19 prevention measures introduced by the province, including enforcing physical distancing rules and mask use, the union said.

“Our bus drivers are under increasing pressure every day. There’s no recognition, and unfortunately this employer is pushing the Bill 28 agenda that this government has put down,” Bruske said.

Although the division says the strike action is expected to focus mainly around the bus depot, it advised parents on what to do if they encounter picket lines at their children’s schools.

“Picket lines are designed to slow things down. Do not force your way through,” the school division said in the letter.

If parents are stopped by picketers, they should wait, and if anyone wants to talk to them, they should listen or explain that they aren’t involved in the dispute and want to take their children into the school, the division said.