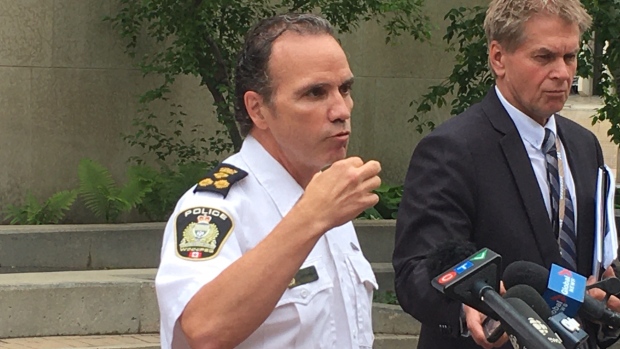 WINNIPEG — As police face calls for defunding in the wake of Black Lives Matter rallies, Winnipeg’s police chief says it is too early to defund the police service, as it could put the community at risk.

On Monday, following a Police Board Meeting at City Hall, Police Chief Danny Smyth said he was pleased with the community and the police officers in how they handled the Justice 4 Black Lives rally at the Manitoba Legislature on Friday.

Following the rally, Justice 4 Black Lives Winnipeg circulated a petition demanding change from the Winnipeg police, the City of Winnipeg and the Province of Manitoba.

“Above all else our group supports and advocates for complete abolition and defunding of the Winnipeg Police Service,” the petition reads. “We strongly believe in the ability of local communities, grassroots organizers and grassroots organizations to provide what their community needs directly, in order to effectively and efficiently step in and take over what legal responsibilities the police currently have.”

The petition says organizations including Mama Bear Clan, volunteer organization AYO, Klinic Community Health and Spence Neighbourhood Association show what this concept looks like in practice, and said a large chunk of the city budget would be better allocated to support community initiatives.

As of Monday afternoon, the petition had nearly 25,000 signatures.

Smyth said more discussion has to be had as to what defunding looks like, and how it would impact the community.

“It’s a little bit too early to just say defund the police and forward that all to social services,” Smyth said. “If you were to just rip a large segment of the budget all at once, then I think you would be putting our environment into a more volatile place than it is now.”

He said there are different ideas about what defunding the police could look like, and said there is room for more conversation.

Smyth said Winnipeg police are open to wearing body cameras and said they are talking in earnest with the city about it.

He estimated a body cam program for the Winnipeg police would cost between $8 to $10 million, which would include processing and storage.

“It is an expensive undertaking, but that is not an excuse not to do it,” Smyth said.