Winnipeg Police Service Const. Rob Carver said officers were called to the area of Pembina Highway and Warsaw Avenue around 11:45 a.m. on Wednesday. He said employees at a building in the area found some “incendiary devices associated with some vehicles” in a nearby parking lot.

Carver was not able to say what these devices are, but said there were fewer than 10 located near the vehicle’s gas tank outlets.

He said he hopes to provide further information later.

“I can tell you that it looked suspicious, which is why we came to a suspicious call. Our investigation led us to the conclusion that we needed to get a lot of resources here to make sure everyone is safe,” Carver said.

A heavy police presence was seen in what appeared to be the parking lot of a car dealership Wednesday afternoon. Carver said the Winnipeg Fire Paramedic Service, along with bomb technicians are on the scene and are attempting to make sure the devices are not dangerous. 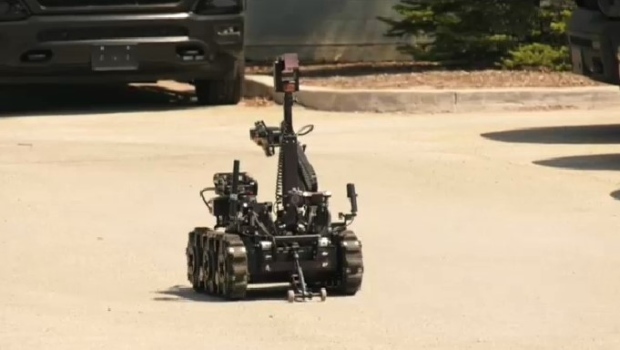 Winnipeg police robot on the scene of a suspicious incident on May 20, 2020. (Source: CTV News Winnipeg)

“They have made the area as safe as they can. They are the only ones in the area at this point,” Carver said. “They are using the robot to attempt to make sure that none of these are potential threats to the public, or themselves or our officers.”

CTV News Winnipeg will update this story as more information is provided.