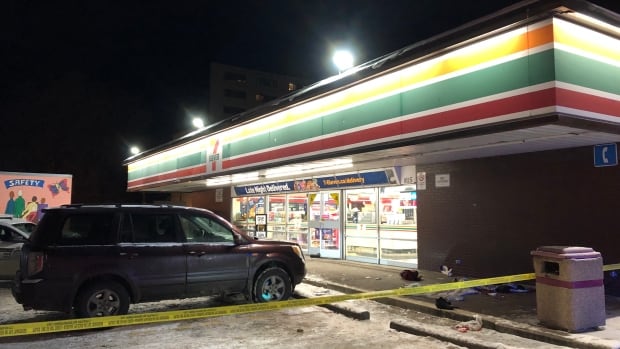 Manitoba’s police watchdog says a Winnipeg police officer was justified in shooting a 16-year-old who came at him with a machete after robbing a convenience store last November.

The Independent Investigation Unit of Manitoba released its report Friday on the incident, which happened at a 7-Eleven on Nov. 21, 2019.

Police responded to 911 calls that the store, near the corner of Arlington Street and Ellice Avenue, was being robbed by a person with a machete.

Witnesses told the IIU that the teen, who appeared to be locked in the store, began smashing at the glass doors.

When they arrived, officers saw the teen exit the store with a large knife or sword in his possession, Zane Tessler, the IIU’s civilian director, wrote in his report.

The teen then walked directly at the officer while carrying the weapon in a raised position, the report says.

The teen refused to drop his weapon despite officers calling on him to do so. Police also tried to use a stun gun on the teen, but it had no effect, according to the IIU report.

The teen was very close to the officer who fired the shots, Tessler wrote, and there were also onlookers behind the officer.

Nine shots ring out in this video shot by witness Clifford Boulanger. It shows Winnipeg police officers confronting a teen at a 7-Eleven near the corner of Arlington Street and Ellice Avenue. 1:15

Tessler concluded that the teen “was in a position to cause death or grievous bodily harm to [the officer] or any of the onlookers and motorists if he was to continue to walk east.”

“The threat posed by [the teen] was real, substantial and required to be neutralized,” he wrote.

In preparing the report, the IIU interviewed or reviewed statements from nine civilian witnesses — including a father who was in the store with his two young children at the time of the robbery — and interviewed 10 witness police officers.

Tessler found that the eyewitness all said that the teen had a machete, was walking directly to the officer who fired the shots while holding a weapon above his head, and was close enough to the officer to strike him.

The officer in question told the IIU that he fired the first round of four to five shots when the teen was 10 feet away and advancing toward him.

He said he was afraid the teen would not only harm him, but harm members of the public if he escaped police.

After the initial shots, the teen continued to advance toward the officer. He said he fired another four to five shots when the teen was three to four feet away from him “and could easily strike me with a machete.”

“I believe that if I did not step off the line of attack, the suspect would have ran directly into me, making physical contact and stabbing or slashing me with the machete,” the officer said.

“The suspect clearly displayed he had no intention of following my orders, nor did he fear any force that I or other police officers would use against him.”

Tessler determined that the officer’s use of potentially deadly force was necessary and unavoidable.

“I am satisfied that the evidence gathered from all sources provides sufficient support for the sole conclusion that the decision by [the officer] to shoot [the teen] was necessary to prevent the injury or death to himself or anyone in the vicinity,” Tessler’s report says.

He concluded there were no grounds to justify any charges against the officer.

The teen who was shot did not want to be interviewed by the IIU as part of its investigation, but investigators were provided with a consent form releasing his medical information.

The report says he suffered five gunshot wounds, and was in the intensive care unit for three days after requiring emergency surgery. He was discharged from the hospital in December.

After he was released, he was charged with robbery and possession of a weapon, and sent to jail.