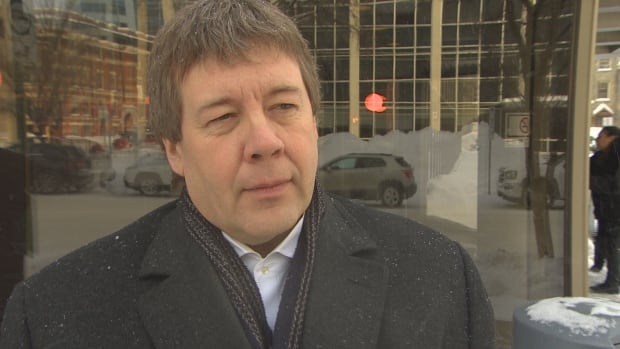 A Winnipeg lawyer will be suspended for six months and forced to pay tens of thousands of dollars, after being found guilty of professional misconduct for accusing a Crown attorney of causing the death of an assault victim who later killed herself.

The penalty decision from a Law Society of Manitoba review panel, dated April 16, says Ian Histed will be temporarily banned from practising law and must pay for the costs associated with the disciplinary process.

The penalty follows a finding of professional misconduct in December, which came after years of Histed casting allegations against other lawyers that were characterized by the review panel as “grave” and “unfounded.”

It stems from a 2014 case in which Histed represented a man accused of assault causing bodily harm against his domestic partner. The man, referred to as B.J. in the document, was ordered to have no contact with the complainant, referred to as K.F., after the charges were filed.

However, the man told Histed that K.F. wanted to have contact with him and was suicidal.

Histed emailed the Crown prosecutor in the case, Sheila Seesahai, in September 2014, asking that the no-contact order be relaxed.

Seesahai said after speaking with victim services, she wasn’t prepared to do that.

There was no further contact between the B.J. and K.F. The woman killed herself in October 2014.

In further emails, Histed said the woman’s suicide was a “direct, foreseeable result” of the Crown attorney’s decision not to lift the no-contact order, and argued in court that the charges against B.J. should be stayed on the grounds of Crown misconduct in relation to the woman’s suicide.

The motion to stay the charges was dismissed and Histed’s client was convicted.

At a sentencing hearing on Feb. 12, Histed’s legal counsel and the law society made a joint penalty recommendation.

In its penalty decision, the three-person review panel ordered a six-month suspension from practising law and ruled that Histed must pay $34,000 for costs incurred by the law society during its investigation and proceedings.

Lawyer Phillip Cramer, who represented Histed, argued in the decision that the proposed penalty was supported by principles of deterrence, and pointed out that the misconduct Histed was accused of was not for his own personal gain.

Cramer declined to comment further on the penalty decision.

In a statement emailed to CBC News by Cramer, Histed said the penalty could have a chilling effect on lawyers who are defending their clients, calling it a “direct affront” to his freedom of speech.

“It was an improper attempt to take control of the defence of a criminal proceeding to prevent arguments embarrassing to the government from being advanced in open court,” Histed said in his statement.

“This decision is wrong in law and I fully intend to exercise my right to challenge this miscarriage of justice before the Court of Appeal.”

This is the fifth citation the law society has filed against Histed. The penalty decision says he was previously found guilty and disciplined by the society in May 1995, June 2003, April 2005 and November 2006.