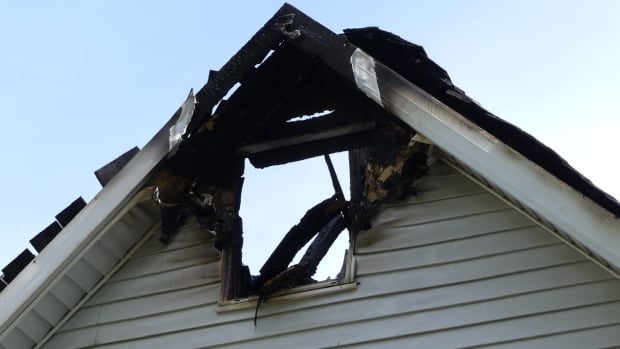 A house damaged in a fire last month went up in flames again on Tuesday, with heat so intense it melted the siding on a neighbouring home in Winnipeg’s Centennial neighbourhood.

The fire was discovered around 1 a.m. Tuesday by police officers who happened to be driving past the 2½-storey house on Elgin Avenue, just east of Isabel Street, a news release from the city says.

When fire crews arrived, they encountered heavy smoke and flames.

The house had been vacant since a fire on July 11 made it structurally unsound, the release says.

It was not safe for crews to enter, so the flames were fought from the exterior and the fire was declared under control just before 2:30 a.m.

A neighbouring home was evacuated as a precaution but no injuries were reported.

The cause of the fire is under investigation and although damage estimates are not yet available, the home is expected to be a complete loss.

There is also no estimate on the damage caused to the neighbouring home’s siding.

Firefighters also extinguished a garage fire in the 500s of Aberdeen Avenue, in the city’s North End.

They were returning to their station from another call around 1:15 a.m. when they came across the blazing garage, the city news release says.

The fire was quickly brought under control and no injuries were reported.

The cause of that fire is also under investigation.