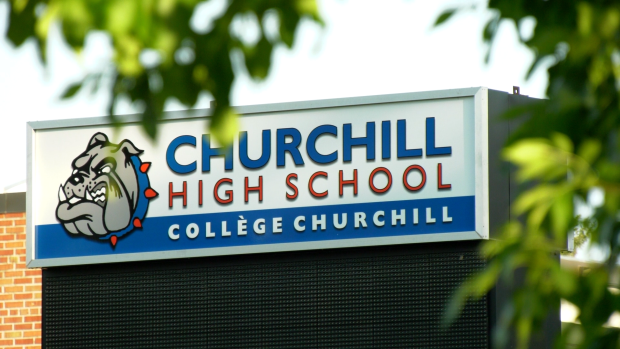 WINNIPEG — The Manitoba government has confirmed a student has tested positive for COVID-19 and was at a Winnipeg school on the first day students were back in class.

The student was in Grade 7, Room 20 at the school, and was a case identified in the province’s earlier news bulletin on Wednesday.

The student attended the school for a limited time while asymptomatic. The province said the student wore a mask on the bus and in the school the entire time.

The risk is currently being assessed as low, due to physical distancing being maintained at the school, and the mask being worn. The province said the school is not being elevated under Manitoba’s Pandemic Response System, due to the lack of close contacts and low risk.

“It’s a good thing that we’ve been advised by public health that this is a very low risk of the transmission case,” said Radean Carter, the senior information officer for the Winnipeg School Division, which includes the Churchill High school.

“That is not going to prevent us from doing a thorough sanitization of the classroom to have it ready for students to come back to tomorrow.”

Carter said the cohort will not be placed into isolation, as that has not been recommended by the public health office.

“The school and cohort are being notified, and cleaning protocols have commenced out of an abundance of caution,” the province said in a statement.

The province said the student attended the school between 8 a.m. and 1:30 p.m., and rode on Winnipeg Transit Route 16, boarding at the stop at Graham Avenue and Vaughan Street at 7:51 a.m. The bus went directly to Churchill High School.

The city said once Winnipeg Transit was aware of the incident, the bus was “thoroughly sanitized”.

“All employees who have been identified as having been in contact with the bus following the potential exposure have been contacted, and appropriate follow-up measures are being taken,” the city said a news release.

Carter said the student was only in the school for a limited amount of time. She said all students at the school were only there for a short period of time.

“I think it is why it adds to it being a low risk of transmission,” Carter said.

The province said there are no close contacts connected to the case, and Public Health has not advised anyone to self-isolate. Others at the sites do not need to self-isolate but should self-monitor for symptoms of COVID-19.

“The Public Health investigation indicates that transmission was not acquired at school,” the province said in a statement.

There were 16 COVID-19 cases identified in Manitoba on Wednesday, including 14 in Winnipeg.

It is the first reported positive case in a Manitoba school since students returned to the classroom on Tuesday.

“It’s really unfortunate that it had to happen so quickly, but we were prepared and we are putting in place our protocols and responding based on the direction based on public health,” Carter said.

She said a letter has been sent to all parents at Churchill High School with information about the COVID-19 case.

The province said this case will be discussed during Thursday’s COVID-19 news conference.

-with files from CTV’s Danton Unger