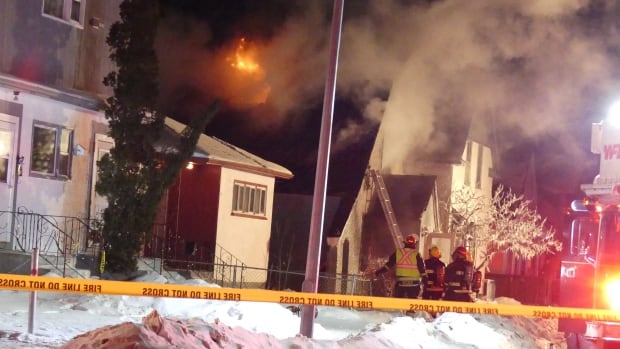 The City of Winnipeg was warning people to stay away from an area of Gallagher Avenue in Weston Friday night, as firefighters worked to extinguish a house fire.

At 7:18 p.m. Friday, the Winnipeg Fire Paramedic Service responded to reports of a fire in a 1½-storey house in the 2200 block of Gallagher Avenue.

When crews arrived, the house was fully engulfed with heavy flames and smoke, according to a city spokesperson.

Some time after 9 p.m., the city tweeted a warning to stay away from the area because of the fire.

Firefighters were initially unable to enter the home do to the flames and smoke, but were fighting the fire defensively, the spokesperson said.

Police had taped off the area and there was a heavy emergency services presence at the scene, including at least five fire trucks.

All occupants of the home got out safely, and no injuries were reported.

The city reported the fire was brought under control at 10:30 p.m., but crews were expected to remain at the scene overnight to deal with hot spots.

The house was expected to be a total loss.