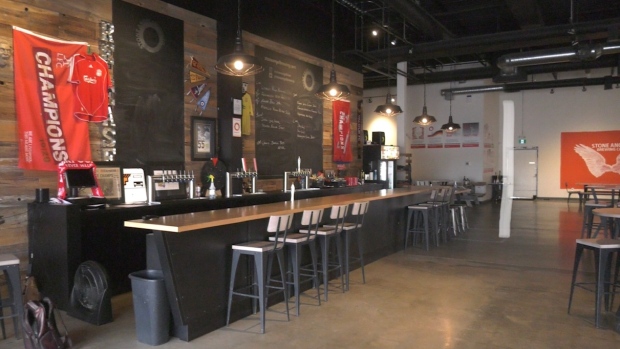 WINNIPEG — Local businesses are responding to public health orders limiting travel to Manitoba, with some taking their own rules a step further than required.

It’s an issue some business owners say has been difficult to police ever since COVID-19 rules were loosened.

Stone Angel’s taproom and patio reopened for business back in June. Since then, the place has served up pints to customers from Winnipeg and visitors from western Canada and northwestern Ontario exempt from Manitoba’s 14-day self-isolation rule.

“It’s a very thin line between trying to keep your customers safe and trying to be hospitable,” said Paul Clerkin with Stone Angel Brewing. “And we’re in the hospitality industry and you don’t really want to give everybody the third degree when they walk in the door.”

Still, Clerkin said earlier this month, workers at the brewery turned away a group of travellers from southern Ontario who claimed they were unaware of the order – a rule that’s put some businesses in a tough spot.

“What are we going to do? Are we going to go out and take registration numbers in the car park?” said Clerkin. “We’re reliant a certain amount on them to be honest and obey the guidelines as well. Sometimes that just won’t happen.”

Some businesses have gone a step further, posting signs outside their establishments asking customers who’ve travelled anywhere outside Manitoba in the past 14 days not to visit.

With travel allowed from certain areas and not others, University of Manitoba ethics professor Arthur Schafer said many businesses are dealing with conflicting interests.

“We want to keep as safe as possible but we want to resume our normal lives and we want our economic activity to be such that small businesses don’t go out of business,” said Schafer, founding director of the Centre for Professional and Applied Ethics at U of M.

It’s marketing Premier Brian Pallister defended earlier on in the pandemic, which Travel Manitoba said has been guided by advice from the chief provincial public health officer.

“From the initial campaign to encourage Manitobans to stay home and stay safe, to the second phase to encourage Manitobans to travel throughout the province, to the current phase of encouraging western Canadians to visit, these are not decisions we make on our own given the situation we are in,” Travel Manitoba said in an email to CTV News Winnipeg.

The organization said it’s not doing any marketing in areas that require self-isolation upon arrival to the province.

While he supports tourism, Clerkin isn’t sure it needs to be promoted during a pandemic.

“I understand hotels, restaurants and bars are all hurting and we could all use tourist dollars, but I think public safety comes first,” he said.

On Monday, Dr. Brent Roussin, the chief provincial public health officer, said while travel remains a concern, Manitoba has its own problems to deal with unlike earlier this summer when cases numbers remained low and travel was seen as one of the main threats.

“As we get a number of more active cases in the province, we know that roughly 14 per cent of contacts become cases, and so the more cases you have here, then a greater proportion of the cases will be contacts of those people,” said Roussin. “Travel from many jurisdictions still poses a risk to us, but we have our own transmission chains right here in the province.”