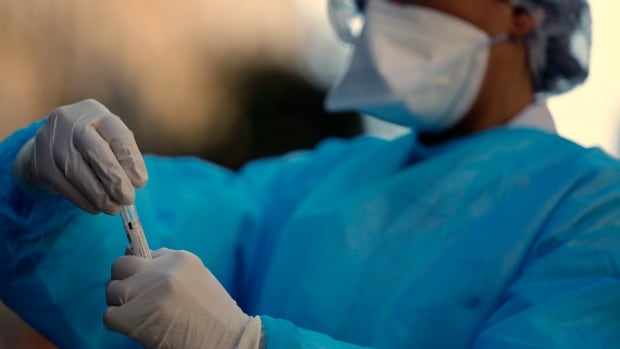 Say your spouse passes coronavrius on to you after returning from a business trip abroad. Is that considered community transmission?

Not necessarily — experts say the answer is a little more nuanced.

“Most of the new cases are connected to travel or through contact to previously announced cases,” Roussin said during one of the daily provincial COVID-19 news conferences.

Some of the cases in that fresh wave involve people who contracted the virus without travelling themselves, yet Roussin wouldn’t say just yet that Manitoba is in the community-transmission stage of the spread.

That’s because health officials can still trace these cases involving people who didn’t travel themselves back to a specific source, providing what Roussin termed “a known transmission chain.”

The “first-generation cluster” was the chain of travellers who returned with the coronavirus, passing it to others who then also tested positive, explained Dr. Kelly MacDonald, head of the infectious diseases program for the Winnipeg Regional Health Authority and a member of an operations committee advising the province on COVID-19.

“It may be what we’re seeing is … all those people who were positive last week, now this is the second wave from their contacts,” said MacDonald, who is also a professor in the departments of medicine, microbiology and immunology at the University of Manitoba.

“The fact that we can identify that those are part of a transmission cluster is a good sign.”

It’s a good sign in contrast to “pop-up” cases, which is what Roussin and MacDonald say would be considered the truer and more worrisome sign that community transmission is occurring.

Right now, when someone tests positive in Manitoba, health officials do an exhaustive review of their movements and people they came into contact with. So far, all cases in the province have been linked back to travel, or someone who travelled.

But pop-up cases occur when health officials identify a positive case and still aren’t able to pinpoint where that person contracted the virus — even after an exhaustive review, said MacDonald.

When pop-up cases begin to grow, as they have in other jurisdictions, a trickle of cases — like Manitoba is currently experiencing — can quickly develop into a flood, she said.

The first place pop-up community transmission is likely to occur is in highly mobile people in the general population —those who already have illnesses and those who could have a big impact in spreading it, like health-care workers.

The Alberta doctors continued to treat patients in the weeks that followed the event because they didn’t know they had the virus.

A report out Tuesday by the Public Health Agency of Canada suggests more than half of all Canadian cases are considered community transmission in the pop-up sense.

One of the main ways of staving off catastrophe is to prevent or delay pop-up community transmission through social distancing. That’s how you flatten the disease curve or keep it from ever taking shape, said MacDonald.

“That’s why these disease curves start out kind of flat and then they suddenly go straight up, is because of that” pop-up community transmission, she said.

“That’s why if nobody goes anywhere, you don’t get that straight up part of the curve — because nobody has a chance to interact.”