WINNIPEG — A Winnipeg city councillor is telling cyclists in the city to get off the sidewalk after an accident at a bus stop.

Coun. Ross Eadie, who is blind, said he was coming off the bus at Main Street and William Avenue near City Hall when a cyclist riding on the sidewalk ran over his cane.

He said while waiting for the cyclist to untangle his cane, which had been snapped in two different places, the man blamed him for the accident. Eadie said the situation left him frustrated, especially with the loss of his cane.

“That stick there – that just looks like a broken stick. You know what that is? My eyes, my independence, the only way I can do my job,” he said. “When I don’t have that, I’m stuck and then I have to depend on people. It’s not right.” 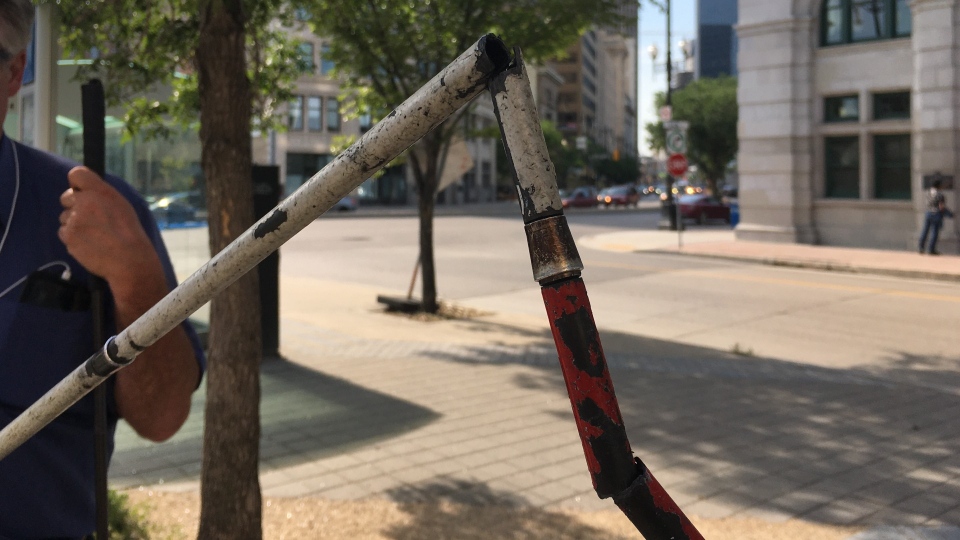 Coun. Ross Eadie’s cane was snapped in two places after an accident with a cyclist on a sidewalk. (Source: Zachary Kitchen/ CTV News Winnipeg)

Eadie said this is the second time he has been involved in an accident with a cyclist while getting off a bus.

He said pedestrians have the right of way on sidewalks, and cyclists need to get off the sidewalk when riding on residential and collector streets.

“It can’t only be me that this is happening too, and I’m sure it’s not just people who have disabilities who are experiencing these problems,” he said.

“What I’m calling on is for everybody – pedestrians, drivers and cyclists – to follow the rules.”

Eadie said he would like the police to ticket more cyclists riding on the sidewalks.

He said he understands how dangerous it can be for a cyclist to ride on the road on busy streets, adding if they have to ride on the sidewalk, cyclists need to slow down, use a bell, and get off the bike and walk it if it gets too crowded.

Anders Swanson, executive director of Winnipeg Trails Association, said he is frustrated to hear of the councillor’s experience, but he said it’s not surprising.

He said there are more cyclists out now because of the COVID-19 pandemic, and said roadways can be dangerous for them.

“I can’t in good conscience tell you not to ride on a sidewalk in some places, because I know why it happens and I sometimes do it too,” he said in a written statement. “But if you find yourself stuck on one, please be considerate, please pass slow, please ring a bell (they’re cheap), and please stop and look at any intersection.”

Swanson also called on the city to stop rebuilding roads without including bike lanes, he said adding this forces many people into breaking the law and endangering other people.

“When you rebuild things for cars only, you create unnecessary conflict on our sidewalks and it affects the most vulnerable first. It’s just plain wrong,” he said.

Eadie said Winnipeggers can give feedback on their experiences on the road by completing a survey online.