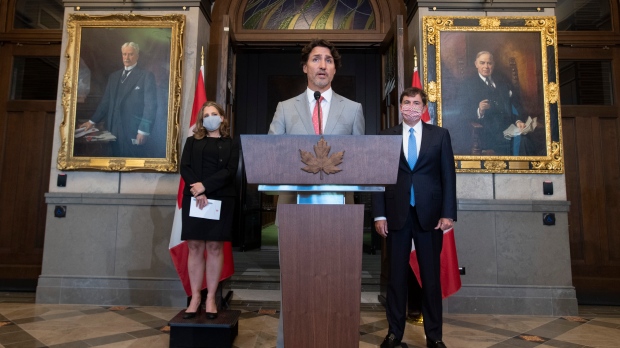 TORONTO — Prime Minister Justin Trudeau has prorogued Parliament, a political first for Trudeau that formally terminates this parliamentary session and sets up a confidence vote this fall that could trigger a 2020 election.

Prorogation is a political tool at the prime minister’s disposal, and it is sometimes viewed as a political reset button. Effective immediately, all legislative work on Parliament Hill has now stopped.

Members of Parliament are released from their parliamentary duties until Sept. 23, when the Liberals unveil a new throne speech, outlining their minority government’s priorities and next steps during the COVID-19 pandemic.

Prorogation also kills any outstanding bills that have not yet become law. However, these bills may be introduced at a later time and will be treated as if they were new. Bills can also be revived at the same stage they were previously in under special circumstances, such as unanimous consent of the House.

Private members’ bills are treated differently and are subject to automatic reinstatement once Parliament’s new session begins next month.

Committees stop sitting after prorogation, but committee work may be revived later, either by the House or in committee. This means that prorogation will at least temporarily pause several ongoing committee probes into Trudeau’s government and the WE Charity controversy, as committees cannot meet.

In an effort to stave off some criticism of this move, Trudeau said Tuesday he had just released thousands of pages of documents related to the controversy that all MPs will soon be able to pour over on their own over the next month, and come back with fresh questions when the new session begins.

Proroguing Parliament is not the same as dissolving Parliament, which kicks off a federal election. Members of Parliament including the prime minister retain their positions during prorogation, and the elected government remains in power even though the House of Commons and Senate are shut down.

However, an election could happen later this year if, upon the return of Parliament this fall, the minority Liberal government loses a confidence vote on an important bill, such as the upcoming throne speech.

The possibility of a fall election has loomed over Ottawa for weeks after some opposition leaders called on Trudeau to resign or face a snap election following the WE Charity scandal.

Trudeau is expected to hold a cabinet retreat during the time Parliament is prorogued. Chrystia Freeland was recently appointed as finance minister — the first woman to hold the position — following Bill Morneau’s resignation. Freeland will hold the new role alongside her existing portfolio as deputy prime minister.

News of Trudeau’s prorogation comes almost seven years to the day of Harper’s 2013 prorogation amid the Senate expense scandal.

In the Liberals’ platform in 2015, they accused Stephen Harper of using prorogation “to avoid difficult political circumstances.”

“We will not,” the Liberals pledged.

But the opposition has accused Trudeau of doing precisely that. Conservative Leader Andrew Scheer described prorogation as “a disgusting attempt to make Canadians forget about his corruption.”

“At a time when Canadians are looking for stability and leadership, Justin Trudeau has given them corruption, chaos, and cover-ups,” Scheer said.

Trudeau defended his decision Tuesday, saying the move “is about testing the confidence of the House.” He also described the country as “at a crossroads.”

“As much as this pandemic is an unexpected challenge, it is also an unprecedented opportunity. And this is our chance to build a more resilient Canada, a Canada that is healthier and safer greener and more competitive, a Canada that is more welcoming and more fair. This is our moment to change the future for the better,” Trudeau said.

With files from CTVNews.ca’s Rachel Aiello and The Canadian Press