Home  »  News   »   ‘We’re all in this together’: Winnipeg brothers spread inspiring message with Lego 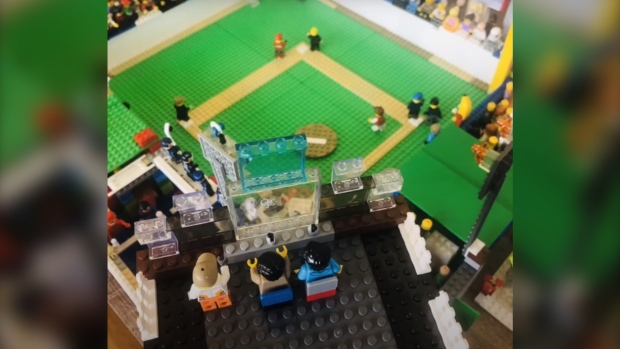 WINNIPEG — Nine-year-old Finnley and seven-year-old Declan Strongman have created their own “Lego Galaxy Baseball Stadium,” featuring concessions stands, an activity area and underground parking – and it’s entirely made of Lego.

According the boys’ mother Michelle Diawol, the idea began while she was trying to navigate working from home, while also being a teacher to her kids during the pandemic.

She said over spring break, she noticed her sons were gravitating towards Lego.

“They became really inspired and started working on this Lego project and what I noticed is that’s what they gravitated to every single day. They did it all day. They were super engaged and focused,” she said.

“They came up with the idea, they designed it, they planned it, they built it, they added on and just to see them working together and collaborating was really quite amazing.”

As the boys continued to work on the stadium over the next few weeks, Diawol realized how much project-based learning was taking place, something the kids’ teachers always encouraged and inspired.

“I just realized how much learning was happening through that project, not standard learning that a lot of parents would necessarily think is important, but actually in some ways more important,” she said.

Once the stadium was complete, the boys wanted to share it with their classmates and decided to do so through a video.

Declan noted he hopes those who see the Lego project know they aren’t alone in this pandemic.

“We want to send the message that we’re all in this together and everybody here is going through this,” he said.

Finnley said they also hope to inspire other people to get into Lego.

“We wanted to get some Lego lovers to start doing their Lego if they aren’t doing it right now,” he said.

Though this was Diawol’s first time creating a video, she said she learned, alongside one of her sons, by looking at a program and then watching videos on Youtube.

The first part of the video takes viewers through a tour of the baseball stadium, while the end displays photos, such as a rainbow, chalk art and stuffed animals in a window that were taken during the pandemic. Diawol said this is to represent the fact that though everyone is struggling right now, there’s still some incredible moments if you just look.

“It’s by no means that we’re living our best life. We’ve had so many difficult days, but there’s been so many incredible moments,” she said.

A MESSAGE TO PARENTS

Diawol said throughout the pandemic she’s been hard on herself and there’s many days she’s felt like she’s not doing a great job.

“Teachers do so many incredible things during the day while our kids are at school and we don’t even know it. And we can’t, even with their help, emulate school,” she said.

She noted parents can’t recreate all of the richness that school provides and urged them to have some grace for themselves.

Diawol said when kids engage in creativity, it can breed valuable learning opportunities.

“The learning that can happen when you watch kids doing something that they’re really passionate and excited about, that’s meaningful to them,” she said.