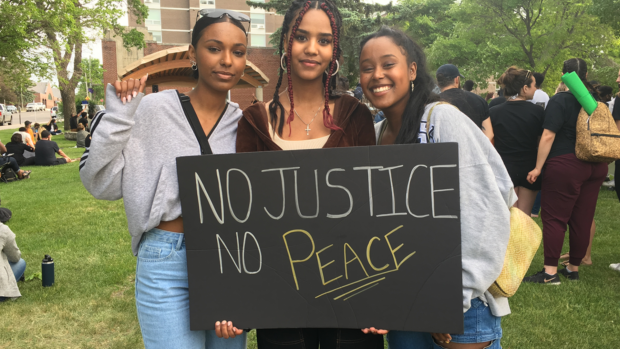 BRANDON — Around 300 people gathered for a peaceful Black Lives Matter rally Saturday night in Brandon to protest racism and police brutality, and add their voices to a movement sweeping across Manitoba and the world.

“We want a change,” said 21-year-old protester Keenen Caribou. “We want a difference, we want to matter. To some people we don’t matter.”

Protesters marched downtown, making their way to Princess Park, and kneeling for a moment of silence that lasted eight minutes and 46 seconds — the amount of time it took for a Minneapolis police officer to kill George Floyd.

Many in the crowd said they were there to pay tribute to Floyd and bring attention to discrimination in this country.

“A lot of people think there isn’t racism in Canada, because we’re a few miles away from the border. That’s completely not true,” said Saron Lemma.

The rally in Brandon comes on the heels of a major protest in Winnipeg. Thousands of people marched from the Manitoba Legislature to the Canadian Museum for Human Rights.

At both rallies in Brandon and Winnipeg, there were calls to defund the police and shift resources to community programs.

Many of the protesters in Brandon said the problems run deeper than policing and described the prejudice Black people face on a regular basis.

Betty Gebru said being followed around in stores is a common experience.

“Sometimes I feel like I have to have my hands where they can be seen, so I don’t have an altercation,” said Gebru.

Yeabsara Gonete said she is hopeful this movement will lead to meaningful change.

“For a lot of white people, this is their first time really understanding what Black people go through. There are so many layers,” said Gonete.

Many in the crowd were students like 17-year-old Kobe Lim, who said he wants to see a more equal future.

In an Instagram post, the organizers of the event in Brandon said they wanted to remain anonymous because of safety concerns.