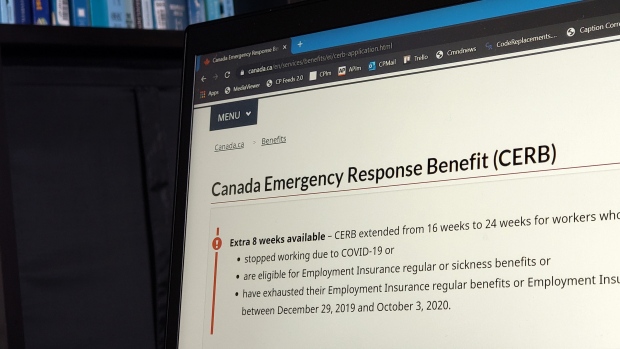 TORONTO — Complaints about seeming delays in Canada Emergency Response Benefit claims have flooded social media this week, with the CERB acronym trending on Twitter both Wednesday and Thursday.

Many CERB recipients have been accustomed to receiving direct deposit payments within 48 hours of reapplying for the benefit, leading to questions from those who reapplied on Monday about why they still did not have payments on Thursday.

However, the Canada Revenue Agency (CRA)’s service standard is to issue these payments within three to five business days – meaning a payment is not considered late if it arrives within one week of the application.

A CRA spokesperson said Thursday that the agency “expects that the vast majority [of] payments will be issued within this time frame.”

For payments by cheque, the CRA service standard is 10 days.

Did anyone still not receive their CERB payment today? I still haven’t. Its been over 3 days now.

An official speaking on background told CTV News that the CRA has added new due diligence measures to ensure the payments are reaching the correct bank accounts, and that the funds will be going out Thursday and arriving in bank accounts on Friday.

Many stories of so-called “CERB fraud” have emerged in recent weeks, with Canadians reporting attempts to switch the destination for their payments or being notified that they were approved for the benefit even though they had never applied for it.

The CRA revealed last month that two cyberattacks had resulted in some 5,500 CRA accounts being targeted, some of which were used to access online government services.

Many Canadians say their #CERB payments haven’t been deposited or there are processing delays. Here’s what I’ve learned: out of an abundance of caution, CRA has added a layer of ‘due diligence’ to make sure CERB payments are being deposited into correct bank accounts. /1

This is not related to the hack of third-party accounts many Canadians suffered recently, I’m told. /3 #CERB #cdnpoli