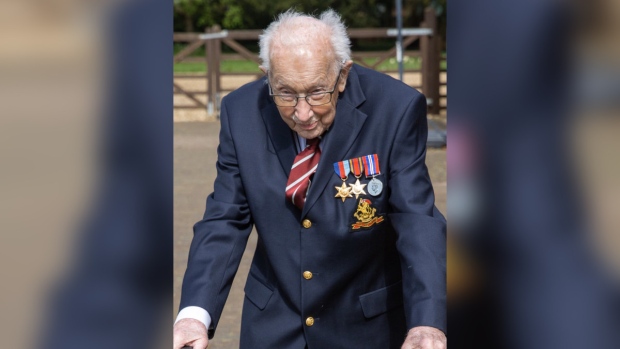 A 99-year-old British war veteran has raised more than £4.8 million (US$6 million) for the country’s National Health Service (NHS) as he aims to complete 100 laps of his garden, aided by a walking frame.

Tom Moore, who will turn 100 on April 30, began the challenge last Thursday to raise money for NHS Charities Together, which raises funds for UK hospitals, including for staff, volunteers and patients affected by the coronavirus crisis.

He had originally set a target of raising £1,000 by his 100th birthday and walks 10 laps each day in his garden, in Yorkshire, northern England.

But within 24 hours he exceeded that target and donations continue to flood in.

The veteran plans to complete 100 laps by the end of Thursday.

Moore trained as a civil engineer before being enlisted in the British Army during the Second World War, where he served in India, Indonesia and Britain. He later became the managing director of a concrete manufacturer.

His daughter, Hannah Ingram-Moore, told CNN that her father had been exercising daily following a recent partial hip replacement and she suggested he challenge himself to do it daily in order to raise funds.

To raise awareness of the fundraiser, her son, 16-year-old Benji, set up a Twitter account for his grandfather — which has now amassed more than 48,000 followers.

“We set it up on April 8 and we’ve been explaining where the followers are and he’s been reading Twitter every day,” she said.

She said he was “floored” by the donations, adding he “is just so impressed and grateful to the British public for their generosity.”

Moore has lived with his daughter, son-in-law and two grandchildren since the death of his wife in 2006.

But, his family says, he continues to live independently in the home and likes to make his own meals.

“He’s stoic, humorous, steady as a rock and positive,” his daughter said. “He always believes that tomorrow is a better day, which is his new hashtag [on Twitter], and is how we were brought up.

“He’s a hard worker and a grafter.”