Home  »  News   »   Wage subsidy program may take a month to be rolled out: employment minister 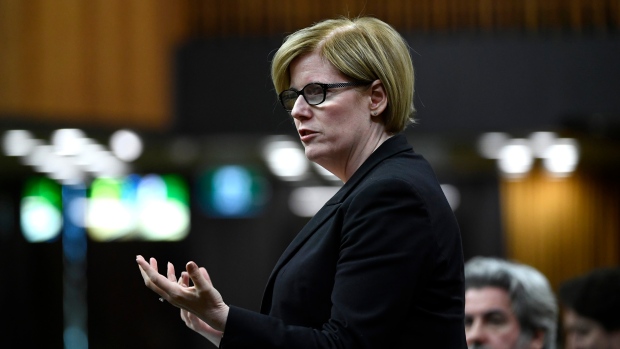 TORONTO — Despite being approved by Parliament, it may take up to four weeks before the $73-billion wage subsidy program is rolled out.

In an interview with CTV’s Question Period that aired Sunday, Employment Minister Carla Qualtrough said it could be two to four weeks before the money is delivered.

“We are pulling out all stops like we did with the CERB to deliver the CWS because we recognize the dire positions that businesses find themselves in now,” Qualtrough said, adding that “the finance minister said it would take about two to four weeks from now to deliver this benefit.”

Qualtrough said the federal government “certainly will” roll out the wage subsidy sooner, if it can.

The legislation — titled “A second Act respecting certain measures in response to COVID-19” — received royal assent on Saturday night after being passed by Parliament during a rare emergency sitting.

Despite criticism over the criteria to be eligible for the subsidy, Qualtrough says there are no plans to change the guidelines.

“You have to show a revenue stream and a reduction in that revenue stream, but there’s a lot more flexibility and a lot more eligible entities as defined under this law that will qualify for this and will be eligible to get this benefit,” she said.

The economic program, which Prime Minister Justin Trudeau said is the most significant since the Second World War, is retroactive to March 15 and available to companies that lost 15 per cent of their revenue in March or 30 per cent in April or May.

NDP Leader Jagmeet Singh told CTV’s Question Period that while the wage subsidy is a “good initiative,” he said the criteria is holding back some of the country’s hardest hit from receiving financial aid.

“We should make sure we send out money to all Canadians… Instead of trying to sift through who’s covered and who’s not, let’s cover everybody, and we can easily tax back and recover the amount that wasn’t needed by those families that were not in a difficult position,” Singh said.

The Parliamentary Budget Officer has projected that the government’s added spending to support Canadians out of work and businesses trying to keep afloat would increase the federal deficit to $27.4 billion in 2019-20 and $184.2 billion in 2020-21.

Regardless of the cost, Singh said the federal government should use its jurisdiction over banks and setting of interest rates to enforce a pause on mortgage payments.

“If we have a pause on mortgage than we can put a pause on rent, we can work with provinces to make sure that that happens, and also ensure that happens for commercial rent and mortgage as well, so that no one is going to be out of a place of work as a result of this crisis,” Singh said.

Singh added that more needs to be done to help those impacted by the economic downturn but may be overlooked in the wage subsidy program and the Canadian Emergency Response Benefit.

Qualtrough said the COVID-19 pandemic has made the federal government aware of gaps in its social safety net and has committed to improving the situation.

“We’ve seen that, as a result of this crisis, there’s so many people that are living paycheque-to-paycheque… We need to build better protections in place so there’s more resilience, where Canadians are taken care of,” she said.

“I’m hoping at the end of this, when we come out of it, we don’t go back to normal. We go back to something we actually moved to an improvement, where we take better care of one another, and have better programs in place that respond to the needs of people.”