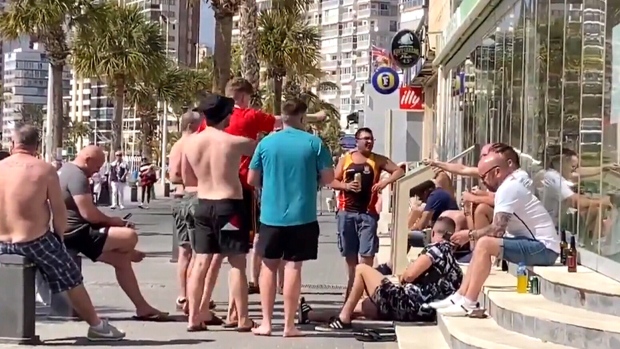 TORONTO — Authorities in cities across Europe, Australia and the U.S. are cracking down on ‘virus rebels’ who are defying efforts to fight the novel coronavirus pandemic.

“Virus rebel” is the name being given to people who flout mandatory lockdown measures or fail to follow advice from medical experts, such as the need to self-isolate or practise physical distancing.

Commuters in London, England, seemed to ignore calls from city officials as well as the mayor to stop all non-essential travel to fight the growing spread of COVID-19.

A short video posted to Twitter by the user YOurNightNurse on March 23 showed large crowds of people nearly shoulder-to-shoulder walking across a platform at the Leyton tube station on the Underground’s Central line.

The user tweeted: “Absolutely insane!” and added the hashtags #UKLockdownNow and #SocialDistancingNow.

Another Twitter user, whose profile bio says he’s a teacher, posted a similar video showing a train stopped at an Underground station with commuters completely packed in to the edges of the open doors.

On March 20, London Mayor Sadiq Khan urged people to “stop all non-essential use of public transport,” calling it a matter of public safety.

So-called ‘virus rebels’ are also being reported in other big cities across the U.S., Germany, Spain, France and Australia.

A group of men with British accents were seen singing on the street outside a cafe in Benidorm, Spain, despite the fact that the country imposed a nationwide lockdown on March 14.

While France imposed a 15-day lockdown on March 17, during which people were told to only leave home for essential reasons, video taken of a local market in Paris showed people bustling about and not observing physical distancing.

Australia’s government ordered the shutdown of Sydney’s iconic Bondi Beach on March 21, a move that stunned locals and tourists alike.