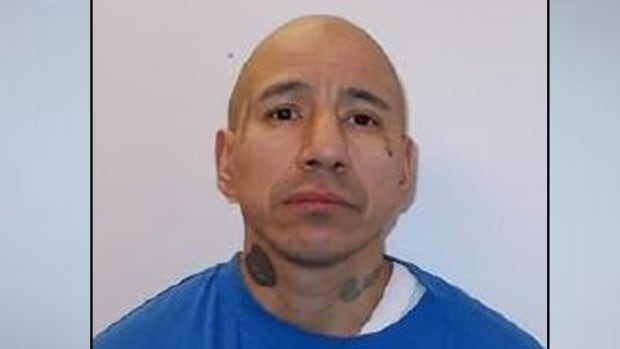 A man with a history of violence, including sex offences and a previous manslaughter conviction, is expected to live in Winnipeg after being released from jail on Tuesday, police say.

Marcel Hank Charlette, 47, is set to be released from Brandon Correctional Centre after serving a six-month sentence for breaching conditions of an earlier release, according to a news release issued on Tuesday.

He has a criminal record that includes violence and sexual offences, police said, including the assault for which he was given the 10-year sentence.

Charlette, who also goes by Hank Marcel Caribou, Hank Charlette, Peewee and Bald Eagle, is considered high risk to reoffend in a violent or sexual manner, especially against women and children, the police news release said.

He is described as about five feet tall and 123 pounds, with black hair or a shaved head. He has several tattoos, including two teardrops under his left eye. He also has scars on his right thumb and arm.

His record also includes a number of other violence offences.

In 1991, he was convicted of manslaughter in the death of a two-year-old child and received a six-year sentence.

Later that year, he was convicted of assault for punching a woman in the face.

In 1996, he was convicted of aggravated assault for brutally attacking, punching and kicking a woman, and sentenced to 42 months.

In 2004, he was convicted of another assault on a woman, and received a sentence of two years less one day, and three years of probation.

In 2006, he was convicted of two counts of assault, assault causing bodily harm and other offences, and was sentenced to three years in prison.

He is under a lifetime weapons ban, and once he’s released, he is not allowed to possess drugs or alcohol or attend any place or event where selling alcohol is a primary purpose.

He must live at an approved residence and abide by a curfew between 9 p.m. to 7 a.m. daily.

The information about Charlette was released by the Manitoba integrated high-risk sex offender unit, a joint Winnipeg Police Service and RCMP unit.

The release said the information is being made public to let people take suitable measures to protect themselves, but that any form of vigilante activity or other unreasonable conduct directed at Charlette will not be tolerated.