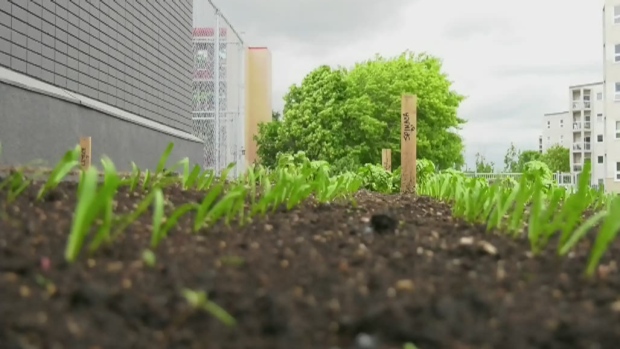 WINNIPEG — The COVID-19 pandemic has caused some disruptions to the food system in Canada.

That insecurity has sparked people’s interest in growing their own food at home and in community gardens.

At the St. Vital Centennial Arena, the Meadowood Victory Garden is sprouting for the first time.

The garden has 15 different kinds of vegetables and herbs growing.

The Winnipeg Food Council expects the garden’s first harvest to be ready within a month. The herbs and vegetables will be put into food boxes and made available to the community.

Sivilay said this is an opportunity for the city to realize its ability to grow food, and for people to become more connected with where their food comes from.

“People seem to be really interested in growing their own food this year, and the whole victory garden mentality [is] really seeing a resurgence,” said Sivilay.

Residents were encouraged to grow food in their backyards for personal use and the war effort.

Homeowners were even asked to keep hens in their yards for egg collection.

Brian Mayes, city councillor for St. Vital, said the garden is a credit to the Winnipeg Food Council.

He believes the garden will be a benefit to the community and help with food security.

“This was gravel for as long as I can remember, and now things are growing here,” said Mayes while pointing to the plant beds. “Hopefully, this is something we can do again in the future.”

Sivilay said this is the only victory garden planned in the city for now, but she believes there’s an opportunity to plant a lot more gardens in the city moving forward.

“We often think about agriculture as being a rural activity,” she said. “But urban agriculture is popular, and practiced in a lot of places, and here in Winnipeg too.”