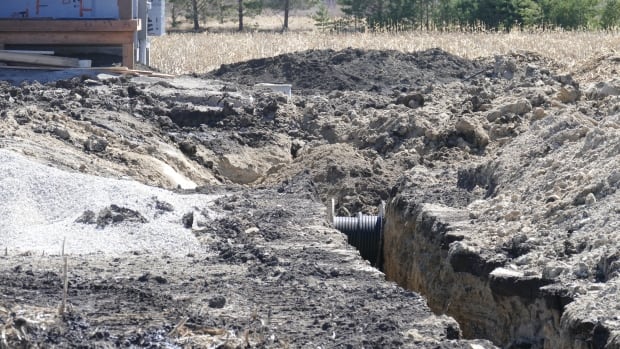 The union that represents thousands of Manitoba workers is asking what safety protocols were in place when a construction worker was killed after a trench wall collapsed on him earlier this week.

The Manitoba Government and General Employees’ Union says the death raises a lot of red flags about the construction company’s record, and the number of safety inspections taking place in the province during the COVID-19 pandemic.

RCMP were called to the work site on Hillside Road in Oakbank, just east of Winnipeg, around 1:30 p.m. Wednesday after a trench wall collapsed, trapping the 39-year-old worker underground.

Emergency crews worked late into the night on Wednesday and on Thursday morning to try and rescue the man. It wasn’t until 9:30 a.m. Thursday that the man was found and pronounced dead.

“All accidents are preventable and that’s the reason we do have standards in place,” said Blaine Duncan, workplace safety and health specialist with MGEU.

Duncan said this latest accident brings to light the importance of workplace safety, especially during a pandemic.

“We’ve had some concerns over the last couple of weeks with respect to not only COVID-19 conditions, but also with the reopening of businesses,” he said.

“We’ve also had concerns with respect to the reduction of field inspections by workplace safety health officers.”

Duncan said it’s not known if the company overseeing the excavation had a permit or whether safety requirements were followed. But it says the company has a history of failing to comply with work orders.

Ordered to halt a 2018 excavation

“While all of the circumstances surrounding this tragedy are not yet publicly known, the employer had previously been issued a stop work order for breaching safe work requirements in a 2018 excavation,” the letter states.

MGEU said the contractor in this case received two stop work orders in 2018.

It said one of the orders was for breaching safety requirements during excavation work, similar to the excavation done in Oakbank, and the other was for contravention of fall protection.

“For an excavation of any kind, you want to make sure workers wouldn’t be at risk should they enter that excavation,” Duncan said.

“Now whether or not this company that’s involved did in fact receive a permit and whether or not the [inspection] branch was out to do an investigation as a result of the permit, we’re not sure,” Duncan said.

The letter sent to the minister Friday also said Manitoba has scaled back inspections since the end of March.

“It is unacceptable that safe work procedures for the people responsible for enforcing safe work rules were not implemented until seven weeks after COVID-19 arrived in Manitoba,” the letter says. “It is also unacceptable that a plan to restore deployment of WSH officers for on-site inspections was not in place for the May 4 reopening of the economy.”

The union said only a “handful” of workplace safety health officers were sent into the field since the pandemic began, and they have been restricted to do “drive-by” inspections only, instead of in-person meetings.

RCMP and Workplace Safety and Health continue to investigate.