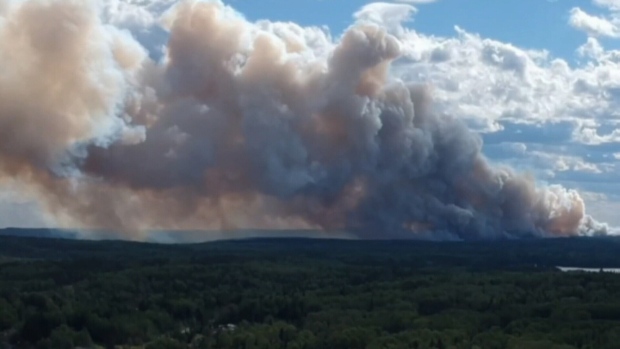 TORONTO — Almost all of Red Lake, Ont.’s 4,000 residents have left their homes as an uncontrolled forest fire pushes even closer to the remote community.

Red Lake Mayor Fred Mota told CTV News Channel on Thursday that approximately 3,800 residents had left their homes since a voluntary evacuation order was issued, and urged the remaining 200 to flee as soon as possible.

He said the fire had advanced to two kilometres from the west end of Red Lake as firefighters focused on protecting the community and its infrastructure from the flames.

“They’ve been able to hold that and not compromise our hydro lines or gas feeds,” he said.

The fire began Monday and has since grown to 552 hectares, according to Ontario’s Ministry of Natural Resources and Forestry (MNRF). That is quite small by the standard of forest fires – the devastating wildfire in Fort McMurray, Alberta in 2016 was more than 1,000 times that size – but its proximity to the community of Red Lake is unusual.

Mota said Red Lake is used to hosting evacuees from other communities experiencing forest fires at this time of year, and has not had a concerning fire of its own this close since 1980.

The 95 per cent of Red Lake’s population that has evacuated has been dispersed among other communities across northwestern Ontario. Approximately 500 evacuees are 70 kilometres away in Ear Falls, Red Lake’s closest neighbour. Others have been taken further away to Thunder Bay, Kenora and Dryden.

The cause of the fire has not been determined. Its spread has been fuelled in part by hot, dry weather; Mota said there has not been one drop of rain since the fire was discovered. Red Lake is part of a large swath of northwestern Ontario that was given an “extreme” fire danger rating for Thursday by Natural Resources Canada.

Forecasted thunderstorms were expected to provide some relief to that risk, although they also bring the possibility that new fires could be ignited by lightning strikes.

“We’re going to be facing some challenging days due to the weather,” Mota said, noting that high winds from the south could also push the fire further toward the community.

The MNRF is leading a large-scale effort to stop that from happening, bringing in six water bombers and 12 helicopters to aid the firefighting effort.

“During the past three days, the MNRF has made 800 drops of five million litres of water. There are 70 pumps out there, 40 kilometres of hose and over 20 ground crews fighting this fire,” Mota said.

There were nearly 50 forest fires burning in Ontario as of Thursday morning, according to MNRF data. Most of them are very small. The Red Lake fire is the second-largest, behind a 3,600-hectare fire west of the Eabametoong First Nation.

Although that community is not directly threatened by the fire at this time, some vulnerable residents have been evacuated due to air quality concerns.