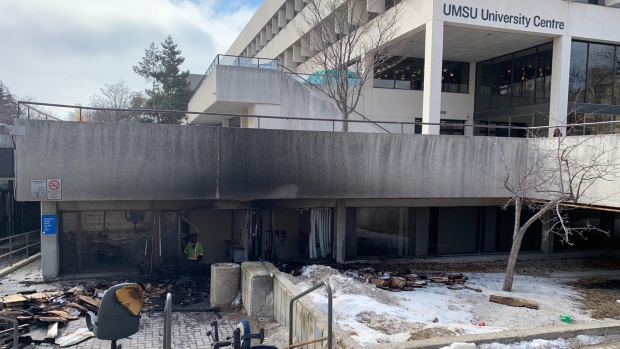 WINNIPEG — A fire broke out during the final day of the University of Manitoba’s ‘5 Days for the Homeless’ camp out.

The Winnipeg Fire Paramedic Service said it was called on Friday just before 1 p.m., to an outdoor fire at the university. Upon arrival, crews found a number of pallets stacked outside of University Centre engulfed in flames.

The WFPS said the fire was declared under control by 1:30 p.m.

The University of Manitoba provided updates on social media, and said University Centre was closed until further notice. The university asked students to avoid the nearby tunnels due to smoke.

The university said the building beside the camp-out sustained considerable damage. The building houses the Campus Dental Centre, which is accessible for students and staff.

“I got a call at home that there was a fire outside, and there was about half a foot of water inside the clinic, and smoke damage, so everything’s been destroyed basically,” said Ken Hamin, who owns the clinic.

Hamin said because of the smoke damage, a lot of supplies will now be unusable. He said as of Friday afternoon, crews were on scene evaluating the damage and cleaning up.

“We had one of our employees go in and have to turn off the compressor, and he said that there was a ton of smoke in there,” Hamin said.

He also commends the university for the policies it has in place, and is thankful everyone got out safely.

In the meantime, he is concerned for clients. He said they typically see two to three emergencies a day with the students, on top of regular appointments.

Hamin said it’s likely going to be a couple of months until the rebuild is done.

There was a fire in the 5Days for the Homeless camp. It has been extinguished by Winnipeg Fire Paramedic Service. More updates will be provided as they become available, including what services have been impacted in UCentre. #umanitoba