LONDON, ONT. — Environment Canada has confirmed two tornadoes touched down near London, Ont. Wednesday night as a line of severe thunderstorms moved through the area.

The weather agency confirmed that tornadoes touched down in Glencoe and Belmont causing damage to buildings, however no injuries have been reported.

Meanwhile thousands remain without power across southwestern and southern Ontario as a result of the storms.

Environment Canada ended a tornado warning for London, Parkhill and Eastern Middlesex County just minutes after having issued the warning at 8:46 p.m.

By then damage had been reported in the Belmont area, along with the possibility of a tornado.

There were also reports of a tornado earlier in the evening in the Glencoe area.

Had the pleasure of seeing this fun stuff outside of Glencoe @weathernetwork #onstorm pic.twitter.com/M9Mb57EPRU

High winds and heavy rain ripped across southwestern Ontario as a result of a large system that moved across the region Wednesday evening, knocking down trees and producing hail in some cases.

Wind gusts up to 100 km/h and torrential downpours between 25 to 50 mm of rain were possible during the storm according to Environment Canada.

In Belmont Ont. a tornado destroyed several barns, throwing a roof across Harrietsville Drive, destroying one vehicle, and closing down a portion of the road. 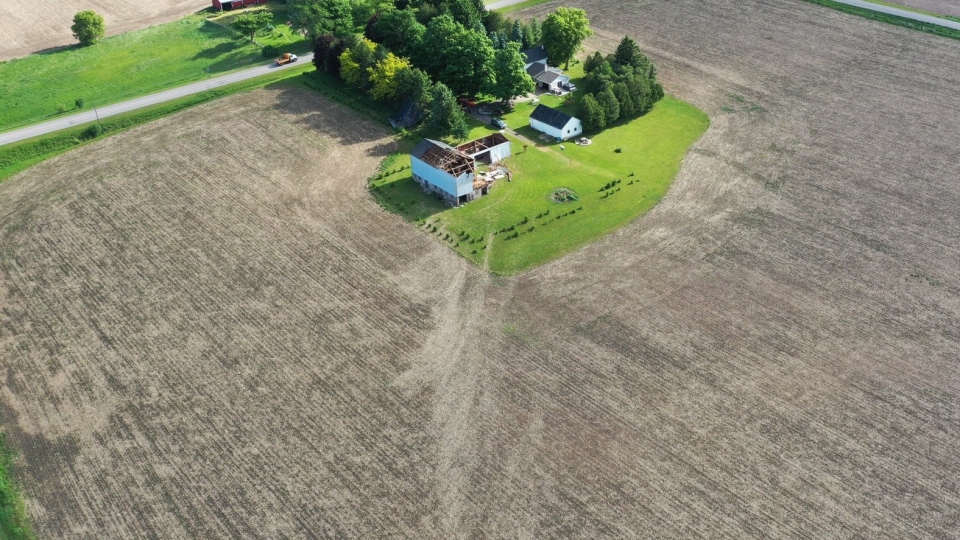 In London, emergency crews dealt with several blocked roads because of downed trees and hydro wires.

Fire crews were on scene at Manning Drive and White Oak Road for a downed tree.

Trees and power line came down along Dingman Drive, and a tree also fell on power lines at 175 Pinewood Drive.

Firefighters also had to deal with a transformer on fire along Sotland Drive.

Westminister Trails Golf Course confirmed to CTV News that a portion of their clubhouse roof was ripped off in last night’s storms.

There were no injuries reported in any of the incidents across the region.

With files from CTV’s Sean Irvine and Matt Thompson.