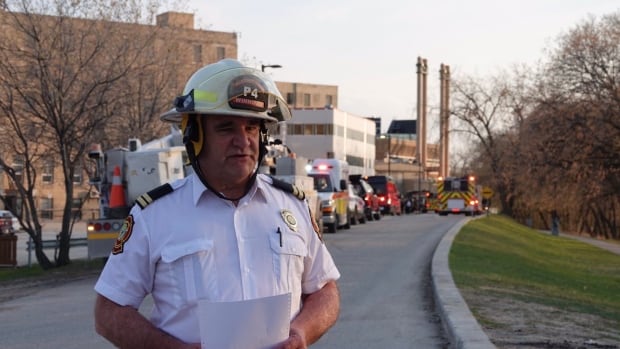 A two-alarm fire at St. Boniface Hospital is now under control, according to the Winnipeg Fire Paramedic Service.

Platoon chief Don Enns said crews were called to a fire at the rear of the hospital on Tache Avenue around 6:47 p.m.

It was escalated to a two-alarm response to the high-risk situation, which Enns said doubled the number of first responders and vehicles at the scene.

Crews managed to extinguish the flames outside the building before going inside.

A firefighter on the scene said the situation was under control by 7:30 p.m.

Enns said the fire started on the exterior of two garages, used to store building materials and supplies, belonging to the hospital’s carpentry department.

There were no evacuations and no patients were impacted as a result of the fire, he said. No injuries were reported.

Damage due to the fire is expected to be “relatively high” due to damage to the building’s windows and offices.