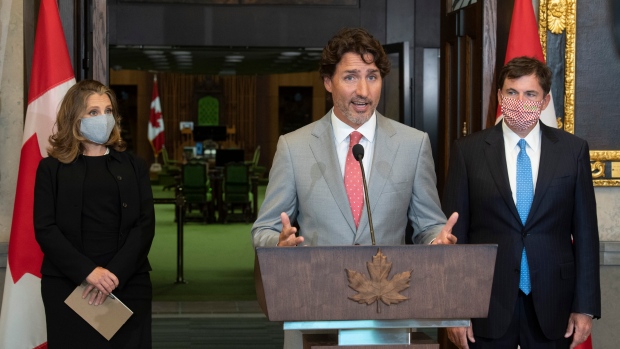 TORONTO — Prime Minister Justin Trudeau hasn’t decided yet whether his children will be returning to school in September, as schools prepare to handle a return to physical operations during the COVID-19 pandemic.

During a press conference to announce the prorogation of Parliament, the prime minister was asked whether he planned to send his children to school this coming fall — a question that parents across Canada have been wrestling with.

And Trudeau’s answer was far from a confident “yes” or a definitive “no.”

“Like so many parents, that’s something that we are in very active discussions on,” he said.

“As a federal government, we will be there to support the provinces as they really make important decisions to ensure that all our kids have the opportunity to be safe as the school year starts up. But I know that lots of parents are going to be watching carefully what their local school and schoolboard’s plans are going to be. And there is a lot of reflection in a lot of households, including mine, as to what’s going to happen when September rolls around.”

Trudeau’s three children attend public school in Ontario. The province has faced criticism from parents and teachers’ unions since they unveiled their back to school plan in late July, with critics saying there should be smaller class sizes to ensure for more physical distancing, among other issues.

On Monday, the Ontario government rejected a new proposal by the province’s largest school board, the Toronto District School Board, which would have reduced the average size of classrooms and required the hiring of 200 additional teachers.

Ontario’s Chief Medical Officer of Health, Dr. David Williams, has given the province’s plan his stamp of approval, but has stressed that there is “no such thing as a totally risk-free setting.”

In his comments Tuesday, Trudeau emphasized that there were many factors his family were considering in order to decide whether to send the kids back to school.

He said that his personal friends “as parents, are asking these same questions.”

Trudeau has faced this question before, but with only weeks to go, it’s more prevalent than ever.

In May, while appearing on talk show Tout Le Monde en Parle, Trudeau said he didn’t know if he’d send his children back to school if they lived in Quebec. At the time, Quebec schools outside of Montreal were preparing to re-open on May 11.

He said in May that he would likely make his decision “at the last minute.”