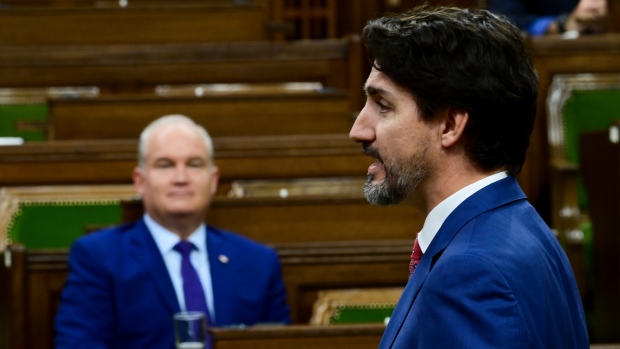 OTTAWA — Prime Minister Justin Trudeau and the federal Liberal minority have survived a confidence vote by securing the backing needed to avoid plunging the country into a snap pandemic election.

After a day of nail-biting tension and accusations of partisan brinkmanship, the New Democrats, Green and Independent MPs sided with the Liberals to defeat a motion to create a new committee to probe alleged Liberal corruption.

Backing the Liberals in this key test of their power means that the push from the Conservatives, supported by the Bloc Quebecois, has failed. MPs will be going back to the drawing board on how to conduct additional scrutiny into the government’s COVID-19 spending, allegations of conflicts of interest, and the WE Charity controversy.

With just over an hour to go before the key confidence vote took place, Paul confirmed that the Green Party’s three MPs would vote against the motion, but she sought to make clear her caucus’ move should not be read to be an endorsement of either the government or the other opposition parties.

“This kind of behaviour should not be rewarded,” Green Party Leader Annamie Paul told CTVNews.ca. “We have to be the ones who say what is obvious to everyone, which is that second wave of a pandemic is not the time to be holding an election,” she said.

Because the Liberals declared the vote to create this committee a matter of confidence, if it had been successful it could have triggered an election call, on the one-year anniversary of the last federal election that saw the Liberals reduced to a minority.

Trudeau framed the vote as a decision for the opposition parties to make: whether to back up their statements of non-confidence and force an election or not. However, the accusation of dangerous partisanship had been levelled right back at the Liberals for appearing willing to go to the polls over a push for more accountability.

Ahead of the vote, NDP Leader Jagmeet Singh said his caucus would “not give prime minister Trudeau the election he’s looking for.”

In minority Parliaments, governments stay in power so long as they maintain the confidence of the House of Commons. That confidence is often tested several times a year with votes on budgets and other monetary matters, but governments can also designate other key votes on important issues as matters of confidence.

All sides said they don’t want an election right now, given new COVID-19 cases climbing and some parties still trying to drum up funds after the last race ended just 365 days ago.

Defeating the Conservative motion means that Trudeau doesn’t have to make the trip to Rideau Hall to speak with Gov. Gen. Julie Payette about the House of Commons losing confidence in his leadership, and the prospect of campaign tours hitting the road within days, is off the table for now.

In terms of the status of a forum to keep up the study into the WE Charity controversy and other Liberal spending and conflict of interest matters alive, the NDP and Greens say they still want to explore ways for accountability to happen but it won’t be under the broad terms the Conservatives had hoped.

“We are here to hold the government to account, and we will work with the opposition parties, we’ll work with this committee or other outlets. … We will also show that we have a vision that Canada can do much better,” O’Toole said Wednesday ahead of the vote.

Specifically, what the Conservatives wanted is to create was a new super committee with priority over House resources that would be focused on studying Liberal controversies including the WE Charity affair and the alleged of misuse of public funds during the COVID-19 pandemic. Their view is that this would free up other committees who had been looking into the controversy before Trudeau prorogued Parliament this summer, to refocus on other issues.

As part of their proposal, the opposition-led committee could have compelled Trudeau and his cabinet to testify for hours more than they already have, and call for the release of thousands more pages of documents than have already been turned over during the months-long controversy stemming from a failed student summer grant program.

The Liberals had argued that the Conservative proposal would have “paralyzed” the government when it should be seized with responding to the second wave of the pandemic and the parallel economic crisis.

In an unsuccessful effort to compromise, the Liberals proposed a separate special committee to evaluate the billions of dollars of federal government COVID-19 spending to support workers, businesses, and the healthcare system, but the committee would be led by a Liberal.

The NDP have already floated a proposal to pick up these various threads at the existing House ethics committee, with Singh saying that there do remain outstanding questions that need answering.

The current predicament MPs find themselves in comes after Liberal MPs ran filibusters to end opposition attempts to revive studies into the WE Charity $912-million grant deal. The committee probes were prompted by accusations of conflicts of interest on the part of Trudeau and former finance minister Bill Morneau due to their close personal ties to the organization, despite assertions the public service suggested WE as the best bet to run the program that never ended up getting off the ground.

The federal conflict of interest and ethics commissioner is still investigating the matter.

Paul is calling on all parties to sit down like “adults” and iron out an agreeable way that this work can be done while allowing Parliament to function and cabinet ministers to do their jobs.

“It is entirely reasonable to expect for the Liberals to make themselves available to respond to the reasonable requests of parliamentarians, and there obviously has got to be a way for them to agree on the formation of this committee, without calling a snap election,” Paul said.

As Deputy Prime Minister Chrystia Freeland pointed out ahead of the vote, if Parliament had been dissolved it would of have left Canadians in the lurch for several weeks without any ability for the government to pass new legislation in response to an ever-changing COVID-19 situation.