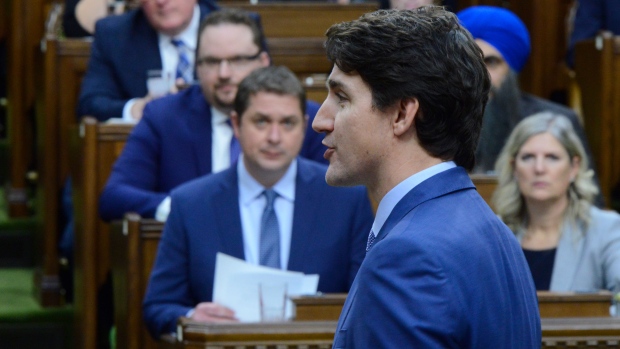 OTTAWA — Opposition parties are ratcheting up their calls for Prime Minister Justin Trudeau and Finance Minister Bill Morneau to resign, with the Conservatives and Bloc Quebecois saying that the Liberals could be facing a fall election, if actions beyond their apologies over their roles in the WE Charity controversy aren’t taken.

In a new statement in French Friday afternoon, Bloc Quebecois Leader Yves-Francois Blanchet said that in light of the ongoing developments in the WE Charity controversy, and what he called a betrayal of Canadians’ trust that Trudeau and Morneau have demonstrated, it’s time for them both to go.

If not, his party plans to consult Quebecers about possibly tabling a motion of non-confidence when the House of Commons resumes in late September. Because the Liberals are currently governing with a minority, their government could be toppled if they lose a confidence vote.

Blanchet said the Bloc also wants the Chief Electoral Officer to consider what physical distancing and other precautions need to be in place should a general election be called.

However, many questions remain about the logistics of a confidence vote in the COVID-19-altered House of Commons, or sending Canadians to the polls during a pandemic.

Elections Canada is currently working on a new approach and considering what health precautions needs to be in place should they have to deliver an election during, or shortly after the pandemic.

Up until now Blanchet has said he doesn’t want Trudeau to resign, but rather step aside until the ethics investigation —which on average takes several months—into the prime minister’s dealings with WE Charity is completed. Now he says he thinks that, as undesirable an election amid a national public health crisis may be, Quebecers want another Liberal scandal even less.

Ahead of Blanchet’s latest comments, outgoing Conservative Leader Andrew Scheer also called for both Trudeau and Morneau to go, but stopped short of suggesting an election.

Scheer said that with the House currently not sitting in a manner that would allow for a confidence vote, and given his party is still in the process of electing his replacement, now is not the time to explore the snap election route.

“I don’t believe he deserves to govern this country. His party received the most seats in the last election, he failed to receive the largest amount of votes but he did receive the largest number of seats, so the Liberal Party of Canada has a right to govern this minority Parliament for as long as they are able to find the support of at least one other party, but there is nothing written that says that that must be Justin Trudeau,” Scheer said, suggesting Liberal MPs could take action and replace Trudeau with a new Liberal leader.

“Are they prepared to sacrifice their personal integrity to protect their scandal-plagued leader, and to cover up corruption? Or are they willing to take a stand and demand that Trudeau step aside? If the Liberals refuse to act, they sit on their hands and say nothing, then they are implicitly approving this corrupt behavior, and they will be just as guilty as Justin Trudeau is,” he said during a Friday morning press conference in Regina.

While the ballots are still being cast to name the next federal Conservative leader, perceived front-runners Erin O’Toole and Peter MacKay have both expressed their outrage over the affair and have committed to holding the Trudeau Liberals to account if they are elected.

Opposition parties continue to push for more answers and have launched three separate committee probes, including asking for Trudeau family financial records related to past speaking engagements. They have also prompted the ethics commissioner to launch conflict of interest investigations into both Trudeau and Morneau’s dealings in regards to a $912-million student service grant program that WE Charity was set to administer.

WE Charity backed away from the program after a series of headlines about their own internal issues as well as others calling into question Trudeau’s ethics and the potential conflict of interest he and his finance minister may have put themselves in by not recusing themselves from the decision-making table on the deal, given their close family connections to the organization.

As well, Trudeau and his top staffer Katie Telford have accepted invitations to appear before the House Finance Committee, where Morneau revealed earlier this week that he had just paid WE Charity back $41,366 in outstanding expenses that the organization covered for two trips his family took in 2017, and that his wife has made $100,000 in donations to the organization in recent years.

“Normally, these would be fireable offenses. In the past, ministers have been forced to resign for much less. So why hasn’t Bill Morneau been fired? Why haven’t Liberal MPs demanded that Justin Trudeau stepped down as leader of the Liberal Party?” Scheer said.

Following Morneau’s testimony, several of his cabinet colleagues have spoken out saying they still have confidence in him and support him staying on as the finance minister.

“Yes, I do have full confidence in minister Morneau. He has been working very hard… And I believe that he has explained himself and testified in front of the finance committee,” said Minister of Middle Class Prosperity Mona Fortier on Friday.

Voting on a non-confidence motion would require either a full resumption of regular sittings, or a plan for remote voting if the pandemic risk is still high enough to keep the full roster of 338 MPs out of the Chamber. At this point it remains to be seen which approach MPs will adopt come the fall sitting, which is scheduled to begin on Sept. 21.

Back in February, when rail blockades were the main preoccupation of the federal government, the Conservatives gave notice of a non-confidence motion, which they now have the ability to table at any point in this Parliament.

If advanced, the motion would need the backing of the other opposition parties to pass, and at this point the NDP have not articulated where they’d fall when it comes to forcing an election over this ongoing scandal.