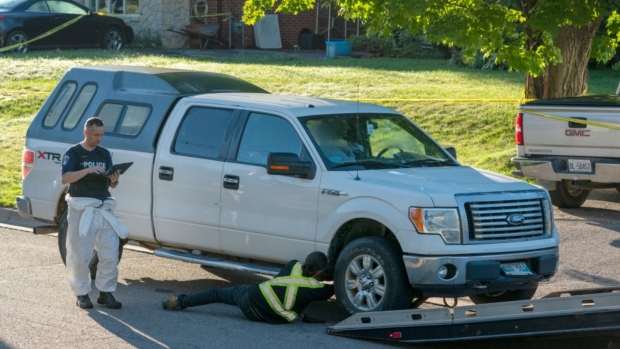 WINNIPEG — Police in Ontario are investigating after a pick-up truck with a Manitoba licence plate was found parked on the street where five people were killed in a home east of Toronto.

Once police got to the scene, they also heard what they believed to be gunshots coming from a home, and were eventually able to go inside a residence.

Police said the deceased victims are believed to be three adults and two children in their early teens.

A woman was also found inside the home suffering from a gunshot wound. She was taken to hospital in serious, but non-life-threatening condition.

Police are not currently searching for any suspects, and believe that one of the deceased is the alleged suspect.

Officers said they are also investigating whether an unknown Ford white pickup truck with Manitoba licence plates, which was found parked on the street overnight, is connected to the incident.

“Right now it is part of our crime scene and it will be towed away and our forensic investigators will be taking a quicker look at it. It is going to be under examination and (we will) determine how it is connected to the case,” said Const. George Tudos of the Durham Regional Police Service.

“Right now it is too early to say its involvement in this case, whether it is related to the suspect or not.”

– With files from CTV’s Codi Wilson.