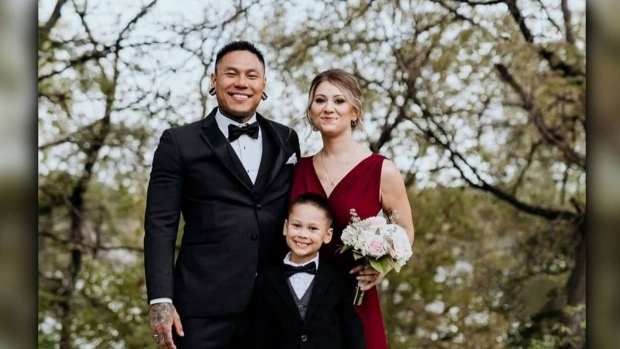 WINNIPEG — The trial began Monday in the death of a Winnipeg father fatally stabbed two years ago at the foster home he ran for boys.

Bracken represented youth and worked with some of the boys in Hibi’s care.

Bracken returned a phone call on December 17, 2018. She was still on the line with him when someone came to the door at 622 McGee Street.

“We were in the middle of talking when all of a sudden I heard him say ‘Hey man this isn’t your house, get out of my house,’ court heard.

“The first time (Hibi) said it he sounded kind of surprised, or incredulous. Then he repeated it more assertively, at which point I heard four or five very loud bangs.”

Twenty-two-year-old Kane Moar is on trial for second-degree murder.

‘I SAW A WOUND IN HIS CHEST’

The first officers on scene were constables Nicholas Willsie and Justin Wieringa. Willsie testified the front door of the foster home was blocked.

“My partner forced entry. He kicked open the door… immediately as the door opened up, we saw a male lying at the front.”

Willsie said they found Hibi in a pool of blood. “I noticed there was a phone near the deceased and shoes underneath his body.”

“The male was rolled over. It was obvious he was not breathing, his eyes remained opened. I saw a wound in his chest.”

An 18-year-old who lived in the foster home Hibi ran also took the stand Monday.

He said he saw Moar after Hibi’s death. “I heard him laughing,” said the witness, “He just said he stabbed an Asian guy.”

The defence cross-examined the teenager, pointing out inconsistencies in his testimony about seeing the accused with a knife.

“You tell the police you were able to see (the accused) leaving down the back alley even though the only window you have access to only faces the front street,” said defence lawyer Evan Roitenberg.

Twelve jurors, which included eight women and four men, listened to one of the first homicide trials in Manitoba since the pandemic.

They were physically distanced and wore masks. Only a handful were in the jury box, while the rest sat in seats around two metres apart.

Hibi’s fiancé and the mother of his son Candace Woloshyn were also in court, occasionally wiping away tears during testimony.