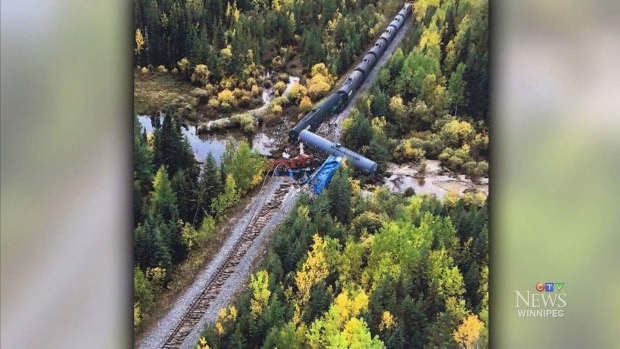 WINNIPEG — The Transportation Safety Board of Canada has finished its investigation regarding a train derailment in Ponton Man. in September 2018, which killed one person and injured another.

The TSB said it “identified a number of factors” that caused the track to washout in the area.

On Sept. 15, 2018, a Hudson Bay Railway train was travelling north on the Wekusko Subdivision when the three head-end train and the first four cars derailed around 4:30 p.m. Police said they weren’t told about the crash until 5:45 p.m. and officers didn’t arrive until around 7 p.m.

The crew was trapped and the conductor died from his injuries, while the train engineer was rescued and taken to hospital in critical condition.

The conductor was identified as 38-year-old Kevin Anderson and the medical examiner determined he died from several blunt force injuries.

Police had also said the train was carrying liquid petroleum gas which was a significant hazard for all first responders.

The TSB said it identified gaps in the emergency response.

“HBR’s emergency response plan had not been reviewed by the regulator and did not set forth any processes or procedures for responding to a train derailment, particularly one that involved dangerous goods and employee injuries/fatalities, occurring in a remote location,” the report said.

The TSB also found that although track inspections had been done and water was flowing through the culverts at the time of the inspection, rising water levels and uneven ponding against the embankment led to the track failure.

“The area had experienced heavy precipitation throughout the summer which contributed to the high water conditions. Furthermore, the reduction of HBR’s beaver control program left the track infrastructure vulnerable to a washout, particularly in situations when a beaver dam is breached.”

The TSB said the railway company has made several changes since the incident, including a more comprehensive beaver control program, an updated security and emergency response plan and safety management system, and its communication policy and requirements were changed as crews are now required to check in every hour when operating in “dark territory.”

– With files from CTV’s Stephanie Tsicos and Beth Macdonell