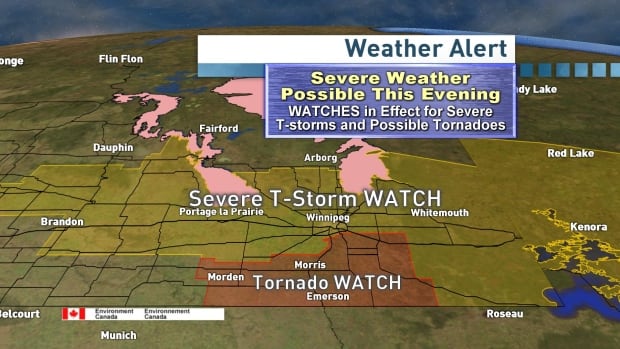 A tornado threat has ended as stormy conditions continue unfolding in parts of southern Manitoba Sunday evening, according to Environment Canada.

In online weather alerts, Environment Canada had issued tornado watches because the weather conditions were looking favourable for the development of severe thunderstorms that could produce tornadoes around Morden, Winkler and Steinbach, Man. In a series of tweets, those tornado watches were lifted, as of 7:15 p.m. Sunday evening.

The weather agency has issued a few severe thunderstorm warnings and several watches that remain in effect for most of Manitoba’s south, from the international border to as far north as the southern shores of Lake Manitoba and Lake Winnipeg. Manitobans should be cautious of possible hail and strong winds.

Environment Canada said meteorologists are tracking a line of severe thunderstorms capable of producing loonie-sized hail, wind gusting more than 90 km/h, and rainfall in excess of 50 mm. At 6:20 p.m., Doppler radar indicated this line of storms stretched from Tolstoi to Piney was moving northeast at approximately 50 km/h.

Severe thunderstorm warnings are in effect for the southeastern pocket of the province. A watch becomes a warning when severe weather is occurring or imminent, according to the agency’s website.

Severe thunderstorm warnings in effect for:

The U.S. National Weather Service in Grands Forks, N.D., held a special weather briefing on Sunday afternoon to discuss the potential for intense conditions including tornadoes, hail, wind and flash floods south of the border around the Red River region.

Tornado outlooks this high are uncommon, typically occurring once a year to every five years, according to the weather service’s online briefing.