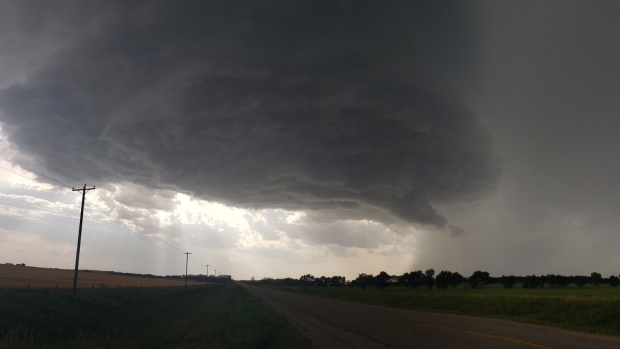 WINNIPEG — A tornado warning issued for parts of western Manitoba Wednesday evening has been reduced to a severe thunderstorm warning.

Environment Canada placed the Municipality of Russel-Binscarth, including the Gambler First Nation, under a tornado warning shortly before 6 p.m. on Wednesday. By 6:30 p.m., the area had been placed under the severe thunderstorm warning.

It said meteorologists had been tracking a severe thunderstorm that could possibly produce a tornado, as well as damaging winds, large hail, and intense rainfall.

Environment Canada said its radar was showing “strong rotation” on a thunderstorm near Binscarth, Man., a community about 15 kilometres south of Russel.

Environment Canada said golf ball-sized hail was likely. Pictures posted to Twitter show hail, roughly the size of an egg, from the storm.

Environment Canada said if people hear a roaring sound or see a funnel cloud, swirling debris near the ground, flying debris, or any threatening weather approaching, they should take shelter immediately.

It suggests people should head indoors to the lowest floor, away from windows and outside walls. They should leave mobile homes, vehicles, tents, trailers, and other temporary or free-standing shelters, and move to a stronger building if possible.