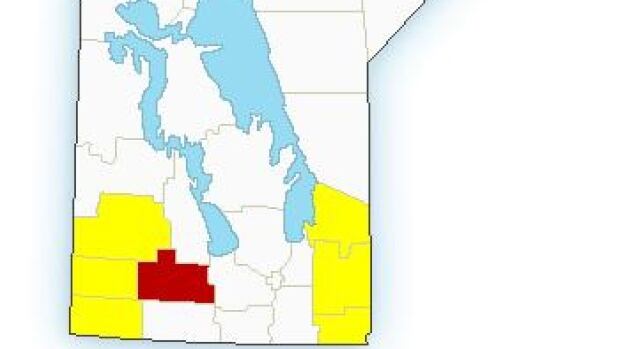 A tornado warning has been issued for part of southwestern Manitoba, including the city of Brandon.

As of 6:30 p.m., areas under the tornado warning include:

Earlier tornado watches for the RMs of Whitehead, Riverdale and Wallace-Woodworth have now been lifted, Environment Canada says.

As of 6:23 p.m., Environment Canada meteorologists were tracking a severe thunderstorm that could produce a tornado, the weather agency said. Damaging winds, large hail and intense rainfall are also possible.

As of that time, the thunderstorm was over the city of Brandon and travelling southeast at 30 km/h.

“This is a dangerous and potentially life-threatening situation,” the agency said in an online notice.

People are advised to get inside and stay on the lowest floor, away from exterior walls.

Several other areas in southwestern and southeastern Manitoba are under severe thunderstorm watches.