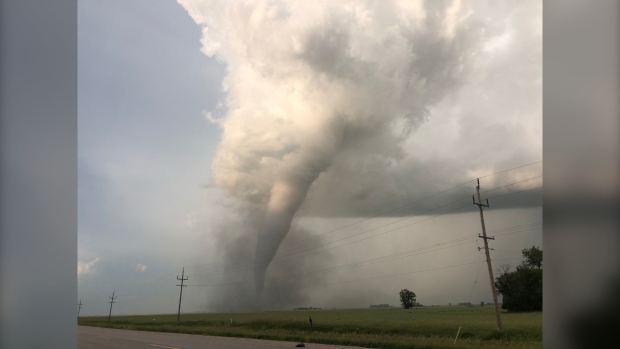 It was reported the twister hit near Scarth, Man. around 8 p.m.

Environment Canada had issued a Tornado Warning for the Rural Municipality of Pipestone and Sifton, which included the Oak Lake area. That was later downgraded to a severe thunderstorm watch.

Environment Canada said the thunderstorm is moving southeast at around 30 kilometres an hour.

If Manitobans see threatening weather they are advised to take shelter.

People are told to go indoors and stay away from windows and outside walls. It is best if people take shelter in a basement, bathroom, stairwell, or interior closet.

For those who can’t make it indoors, they should lie in a low lying spot and protect their head from flying debris.

To report severe weather send an email to MBstorm@canada.ca or tweet using #MBStorm.